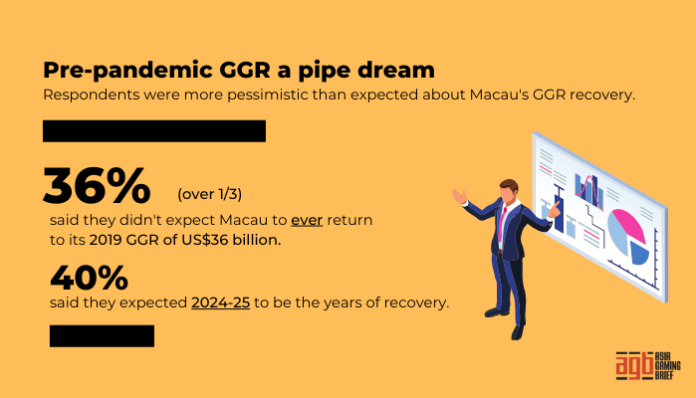 More than 36 percent of respondents to a recent survey by Asia Gaming Brief said they don’t expect Macau to ever return to its 2019 pre-pandemic GGR.

In 2019, Macau casino gross gaming revenue reached US$36 billion, falling 3.4 percent year-on-year due mainly to a VIP decline in December as a result of a three-day visit by Chinese president Xi Jinping to Macau for the 20th anniversary of its handover to China.

In 2020, the full-year GGR number fell 76 percent to US$7.6 billion, due to pandemic-related border closures and travel restrictions.

However, when respondents were asked when they expect Macau to return to its pre-pandemic GGR, at least 36 percent of respondents answered with “Never”.

Though not included within the scope of the survey, the negative sentiment is likely a result of the increased pressure from the Chinese government to reign in VIP and junket play over the past few years.

In August, Macau lawmakers appeared to have recognized that China’s new policies penalizing gambling and attempting to stop its citizens from gambling abroad will have a direct impact on how Macau runs its gaming/ VIP industry and how much revenue the government receives from its largest tax-contributing industry.

Back then, the committee of the Special Administrative Region’s (SAR) lawmaking body tasked with providing the government advice on the city’s gaming concessions, admitted that recent changes to the Mainland Chinese penal code could make it “difficult for VIP rooms to continue their operations“.

That would leave only mass gaming and non-gaming revenue to make up for the GGR shortfall.

However, there was also a group of respondents who pegged 2024 or 2025 as the year of GGR recovery for Macau, showing that sentiments on the future of the industry are still quite polarising. This expectation is more closely in-line with analysts’ estimates.

Many observers in the industry, including one survey respondent, noted that Macau’s return to pre-pandemic GGR will be reliant on Macau reaching herd immunity through vaccinations and eventually shedding its zero-covid policy.

Las Vegas Sands chairman and CEO Robert Goldstein in October said that the combination of easing restrictions and pent-up gaming demand will see Macau witness the same-style recovery that Las Vegas has over the past year.

“Las Vegas will be the blueprint for Asia in terms of recovery,” said Goldstein. “It’s the path. It’s the vaccination rate that is soaring, its open travel lanes, it’s opening the doors up and watching what happens in Vegas happen in Singapore… I think you’ll see a nice turn in 2022 and the same will happen in Macau when the government decides to open its borders up.

In October, Macau health authorities confirmed they will maintain a “zero-covid” policy until vaccination rates in the city reach 80 to 90 percent. As at October 25, 2021, only 52.1 percent of Macau’s population has been fully vaccinated against Covid-19.

The full survey results, including responses to 8 other questions will be released as part of the November edition of AGBriefings Magazine, which releases next week.