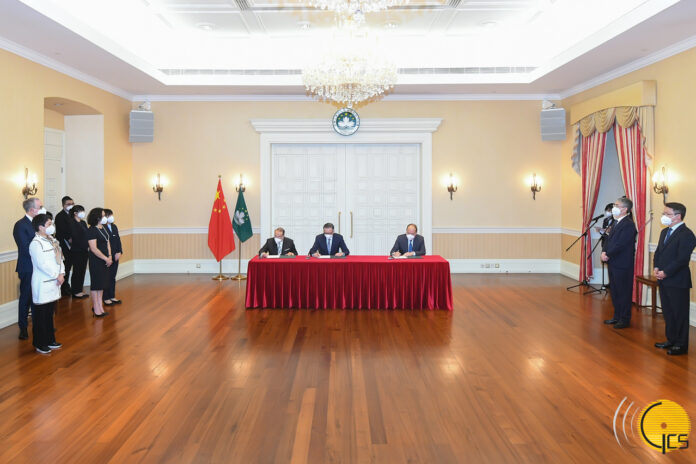 In response to the approval, Macau operators are “truly grateful” for the extension of the contracts, and gaming law revisions, as they set the pathway towards a smooth transition ahead of the tender for the new concessions. All reiterate their readiness to participate in the tender process.

Following the Macau SAR Government’s approval of the six-month extension to its gaming concession, Galaxy stated that it will continue to operate according to the amended “Legal Framework for the Operations of Casino Games of Fortune”, proactively supporting the SAR Government’s policy directions, and contribute and propel the sustainable and healthy development of Macau’s gaming industry.

In a statement, GEG reiterated that is ready to participate in the tendering process for the new gaming concessions and looks forward to further contributing to Macau’s long-term prosperity by seizing the many new opportunities ahead.

Pursuant to the terms of the amended concession contract, GEG has paid a premium of MOP47 million to the SAR Government for the concession extension.

GEG will provide a bank guarantee as required to fully back its gaming-related labor responsibilities. Meanwhile, since June 16, 2022, GEG has ceased the operation of two of its City Clubs, namely Rio Casino and President Casino, while the operation of another City Club, Waldo Casino, will remain in operation until the end of this year.

GEG will reallocate its team members from the Rio Casino and the President Casino to its other casinos while maintaining all of their employment terms. In addition, a series of vocation training programs will be provided for them as part of GEG’s efforts to safeguard local residents’ employment and support Macau’s economic and social stability.

Lui Che Woo, Chairman of GEG, said, “We are truly grateful to the SAR Government and members of the Legislative Assembly for their hard work and dedication to the amendment of the ‘Legal Framework for the Operations of Casino Games of Fortune’, the six-month extension of the gaming concessions, and the preparation of the tendering process. Together, we strive to promote greater clarity on Macau’s future development and facilitate the gaming industry’s sustainable and healthy development.

GEG has always stayed true to its philosophy of ‘what is taken from the community is to be used for the good of the community and will introduce unique and innovative offerings in its IR projects in Cotai, as well as working together with industry participants to support the SAR Government’s efforts to stabilize the economy, increase the public’s confidence, usher Macau’s diversified and sustainable development, and contribute to Macau’s transition to a ‘One Center, One Platform and One Base.’”

In turn, MGM China was pleased to announce that its subsidiary, MGM Grand Paradise Limited has signed the extension of its sub-concession for a further period up to December 31, 2022.

MGM China stated that it will make every effort to obtain the new gaming concession in the upcoming public tender.

“We will continue to fully support the Macau SAR government in safeguarding national security for a healthy and orderly development of the gaming industry and to contribute to the promotion of economic diversification” a press release noted.

Sands China Ltd. was very pleased with the Macao SAR government’s announcement of an extension to the company’s license contract for the operation of games of fortune until Dec. 31, 2022.

The company said it was grateful to the SAR government for its trust and support and will continue to take the lead in assisting in the steady recovery of Macao’s tourism and gaming industry by actively promoting moderate economic diversification and securing employment opportunities for Macao locals as part of the company’s corporate social responsibility efforts.

Sands China underlined that it will comply with and abide by the revised gaming law to contribute to the healthy and sustainable development of Macao’s gaming industry.

“As a company rooted in Macao for nearly 20 years, Sands China continues to be optimistic about the future of Macao, and will proceed to submit its bid for a gaming concession in accordance with the timetable set by the SAR government.”

Sands China considers it its duty to fully cooperate with and support the SAR government’s anti-pandemic efforts – working together to safeguard the local community – at this critical moment in the COVID-19 fight.

In a statement, Melco Resorts & Entertainment Limited said: “We are pleased to see a formal extension of our sub-concession and appreciate the Macau government’s efforts to ensure a coordinated process. We believe the actions today set a clear pathway towards a smooth transition ahead of the tender for the new concessions. We are committed to participating in the upcoming tender and remain aligned with the Macau government’s vision to further the development of Macau and its economy.”

Melco Resorts Macau will pay the Macau government MOP47 million (equivalent to approximately US$5.8 million) upon signing of the Extension Agreement as a premium for such extension.

Melco Resorts Macau will also submit a bank guarantee in an amount of not less than MOP820 million (equivalent to approximately US$101.4 million) to the Macau government within three months from the date of signing of the Extension Agreement to guarantee the satisfaction of any labor liabilities upon expiry of the sub-concession. The Macau government may require an increase in the amount of such guarantee, depending on the actual number of employees employed by Melco Resorts Macau.

In in response to the Concession Extension Agreement, Wynn Macau “would like to express its sincere gratitude to the Government for its guidance.”

Wynn stated that it believes that this extension will enable it to make continued contributions to the future development of Macau and the local community.

“We look forward to the announcement of the requirements and details of the public tender process for the new gaming concessions and will liaise closely with the government to make thorough preparations for active participation in the bidding.”

“The approval of the Gaming Law Amendment Act has laid an essential long-term foundation to facilitate the orderly, healthy, and sustainable development of the industry,” the concessionaire stated in a release.

In addition to adhering to the relevant requirements of the Act, Wynn “will continue to fulfill its social responsibilities and fully support the Government in promoting the moderate diversification of Macau’s economic development, enhancing its competitiveness in integrated leisure and tourism, and further strengthening its profile among international tourists.

Daisy Ho, Chairman of the Board of Directors of SJM, commented: “SJM welcomes this Concession Extension. We are also highly pleased to conclude this week a successful refinancing of our syndicated loan facilities. We are moving ahead on all fronts preparing to participate in the tender for the succeeding concession, and we eagerly look forward to continuing to contribute to the development of Macau in the years to come.”

SJM also announced that on 20 June 2022 it entered into a facility agreement with a banking syndicate led by Industrial and Commercial Bank of China (Macau) Limited for syndicated loan facilities of up to HK$19 billion representing a HK$9 billion Term Loan Facility and a HK$10 billion Revolving Loan Facility.

After the refinancing, SJM will have an additional HK$6 billion of liquidity.

SJM’s refinancing plan has been approved by the Macau Government, the company noted.