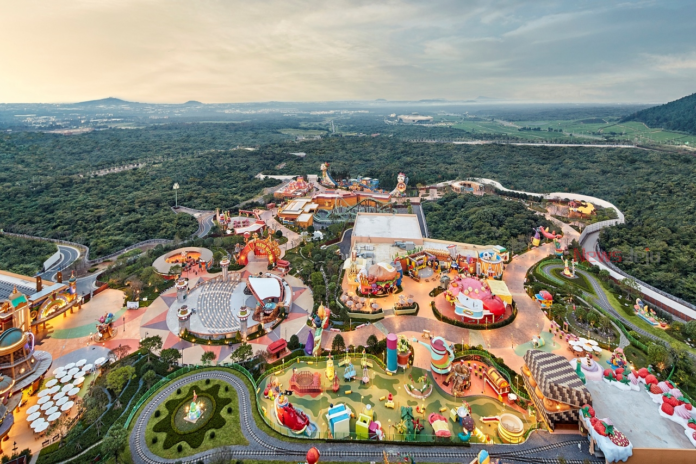 Landing International, the operator of the Jeju Shinhwa World integrated resort in South Korea, has reported a strong uptick in its non-gaming segment during the first half of the year, but says that the performance of its gaming business remained sluggish.

The company operates a foreigner-only casino at its IR on Jeju Island, the Landing Casino, which generated revenue of HKD58.65 million during the six-months, a near-42 per cent fall year-on-year.

But despite the downturn in its gaming segment, overall revenue for the group rose by nearly 82 percent, reaching HKD476.62 million, with non-gaming revenue from Jeju Shinhwa World totalling HKD350.65 million, up  186.5 percent yearly, supported by its hotels, MICE, F&B, theme parks and merchandise sales, as well as leases of retail space at the resort.

Despite the rise, the segment still recorded a loss of HKD291.17 million, a 45 percent reduction in loss year-on-year.

Amongst the drop in international tourism, the company has been targeting the domestic market via staycations packages and promotional events bundles – encompassing accommodation, water and theme park access and F&B packages, which it says were “keys to rapid sales recovery, in terms of both the occupancy rate and revenue” for the period.

The group also reported a sizeable return from sales of resort condominiums and villas, with revenue totalling HKD67.31 million, up 74 percent yearly, with segment profit up over 203 percent, to HKD27.99 million.

Despite the upturn, the group says it still expects the pandemic to cause a “significant impact” to the business in the second half of the year, focusing on the domestic market and implementing “stringent cost control measures to enhance competitiveness”. This will be coupled with a “renovation and upgrade of various facilities” within the resort, which are underway and are expected to “enable the Group to capture the recovery of overseas demands and to sustain its market share”.

The group noted in its Monday filing that the majority of the HKD103.71 million which the group had discovered had been stolen in January by a casino employee is hoped to be recovered once a police investigation into the incident is finalised.

Of the total, some HKD91.89 million is being held in a police bank account, while it estimates “will be retained by the Jueju Police until the investigation process is complete”.

Some HKD72.32 million of the stolen money was found on the group’s premises, reportedly in a junket area, while the remained was “found elsewhere”, reportedly on the premises of whom absconded with the money. “Restricted cash” relating to the theft as of June 30th amounted to HK69.6 million.

Regarding the group’s plans for a possible integrated resort in the Philippines, it notes that it “has yet to identify another suitable lease of land” to develop the project which would satisfy “the requirement of the provisional license”. PAGCOR had granted a suspension of the license while the group seeks a remedy the issue, and “the group is still in the course of exploring the issue with PAGCOR under the travel restrictions”. It notes that it will “continue to adopt a cautious approach to evaluate the feasibility of relevant lease of land and development should opportunities arise”.