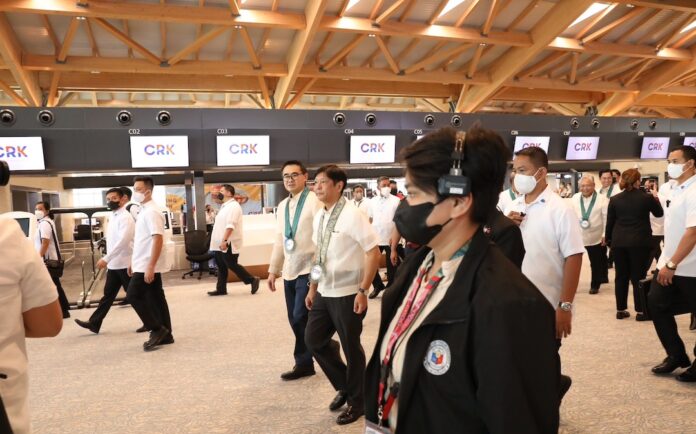 The Clark International Airport’s (CRK) new passenger terminal building is a “strong signal” to the world that the Philippines is open for business, said President Ferdinand Marcos Jr.

The President expects the new facility will support the government’s goal of turning the Philippines into a “logistics center of Asia.”

Marcos made the remark during the grand opening of the CRK’s new passenger terminal building where he led the unveiling of the building marker and toured around what has been described as a state-of-the-art facility envisioned to be Asia’s next premier gateway, the Philippines News Agency reported.

“…This facility is essentially a very strong signal that yes, indeed, we are open for business. We just opened a new terminal. It is state-of-the-art and this is one of the things that we will continue to do in the future to bring you all to come and be partners with the Philippines to help the lives of our people to help the Philippine economy and to improve the lives of Filipinos, make the country more beautiful,” he said in his speech.

He expressed confidence that the CRK’s new passenger terminal building and other public-private partnership (PPP) projects encourage investors to do business in the Philippines.

He also renewed his commitment to ensuring that the government would do everything so that partnerships are to the advantage of both the public sector, the private sector, and the people.

“…This is a perfect example of what government and the private sector can do. And you can see that if it’s only the private sector, they wouldn’t be able to accomplish this. If it’s only the government, they wouldn’t be able to do it either. And that is why this is a perfect example of that. And I think it will serve to encourage other people to enter into this kind of arrangements,” he added.

Citing his working visit to the US last week, Marcos recalled how he invited American investors to take part in the Philippines’ economic resurgence.

“This is also the kind of activity that we were actively endorsing when we were in New York and talking to possible investors, in companies who are already in the Philippines but would like to increase their investment. And this is exactly the kind of partnership that we need to encourage,” he said.

The President acknowledged how some businesses and investments had to be put on hold due to the Covid-19 health crisis, but noted that the country is now slowly recovering from the impact of the pandemic.

“Now that the problem of the pandemic seems to be easing, maybe it’s time to go back to our plans regarding this kind of PPP projects,” President Marcos added.

Marcos is optimistic about the new facility serving as a “building block” to the government’s goal of turning the Philippines into a “logistics center of Asia.”

He also emphasized the importance of terminal building operations in providing opportunities in the areas of employment, investment, and tourism.

It is the first hybrid PPP project under the “Build, Build, Build” infrastructure program of the Duterte administration.

In January 2021, the DOTr and the BCDA turned over the new airport terminal to LIPAD Corporation, its operations and maintenance partner, the Philipines News Agency reported.