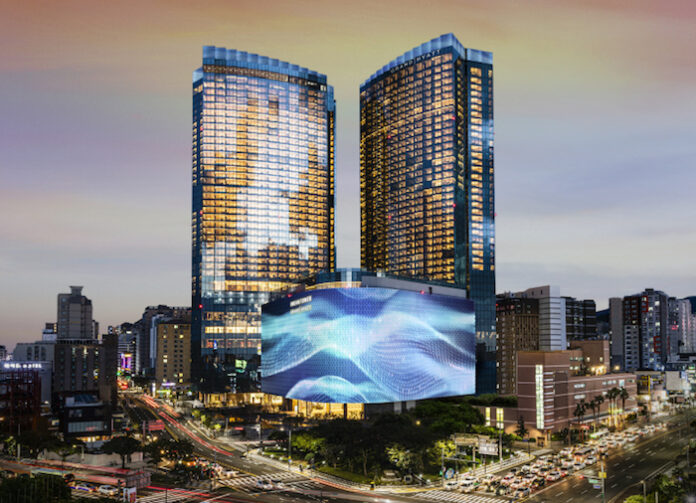 At the end of this week, Lotte Tour Development will hold the grand opening for the Jeju Dream Tower, an ambitious project, forty years in the making, upon which the firm is expected to either rise or fall.

This firm, which traditionally franchises travel agencies, offers home-based travel businesses, and provides leisure-travel information, is well aware of what it has riding on this one massive venture. This reality is best symbolized by the fact that, having been established in Seoul in 1971, it is now moving its company headquarters after nearly half a century into this tower on the distant island of Jeju.

And quite a tower it is, dwarfing any other structure on the island. Now fully-financed at KRW1.6 trillion (US$1.4 billion) in construction costs, it possesses 1,600 hotel rooms (750 directly owned by Lotte), Jeju’s first shopping mall, multiple restaurants and bars, a skydeck with a panoramic view of the island, and a foreigner-only casino.

While the casino is not expected to open this week due to the fact that some official permissions are yet to be obtained, many observers anticipate that it will be a robust cash center once it is up and running. The company has two years experience running a casino, having acquired the LT Casino from Paradise Co. in 2018, but that smaller casino is now being provided a much more substantial home.

Analysts are predicting success for the Lotte casino since it will be differentiated from the other seven casinos on the island in respect to the fact that it will be the only urban casino, and because the Jeju Dream Tower is thought likely to become one of the biggest tourist attractions on the island in its own right.

In the immediate term, the Covid-19 pandemic means that not many foreign tourists will be coming to Jeju, and so the foreigner-only casino will likely get off to a slow start, but that’s not necessarily equally true for the Jeju Dream Tower as a whole, which could benefit from reasonably vibrant domestic tourism even amidst the coronavirus crisis in South Korea.

At any rate, most observers in Korea seem to feel that even if Lotte Tour Development is betting it all on the Jeju Dream Tower, that this is likely to be a very smart play. Something unique has been created on Jeju, and the public may respond with great favor.