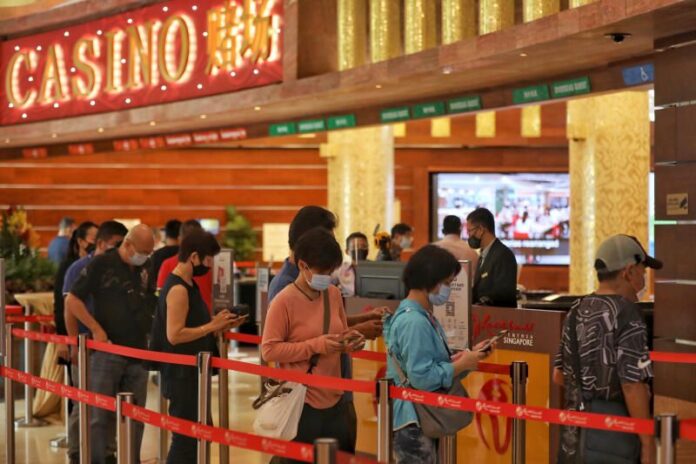 The firm also said it was raising its rating on the stock to Buy from Hold and tweaking is target price to S40.85 from $0.83, which represents upside of more than 10 percent.

Singapore reopened its borders from April and removed testing requirements from April 26th.

Las Vegas Sands reported on Wednesday that Marina Bay Sands had generated EBITDA in 2Q22 of $319 million, higher than management expectations. The return of Malaysian and Indonesian travelers pushed VIP volume to 75 percent of pre-Covid levels and mass market to 92 percent.

“Though a quarter earlier than we expected, they are broadly in-line with our expectation that industry VIP volume/mass market GGR will recover to 75/85 percent of 2019 levels in the long term,” Maybank analyst Yin Shao Yang wrote. “LVS stated that gaming operations will not return to 100 percent of 2019 labels until China relaxes its zero-Covid policy.”

Maybank said it now expects core net profit of $450 million this year, reflecting the faster-than-expected pace of Singapore’s recovery. That compares with $149 million last year. It said its projections for 2023 and 2024 remain little changed, but says there is room for positive revisions should China ease its zero-Covid policy.

The firm did however warn investors to not make a direct comparison with Marina Bay Sands as it expects Genting Singapore to have lost some market share to the rival property.

The company has been the subject of takeover speculation in recent weeks, however analysts think a sale of the unit is highly unlikely.

Genting Singapore said its executive chairman Tan Sri Lim Kok Thay has confirmed he had received an unsolicited takeover approach for the company, but that the offer has not been pursued.