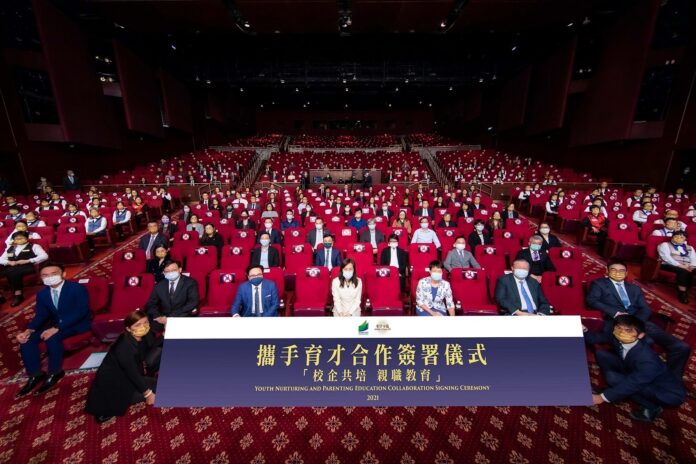 Sands China said it has signed two letters of intent with the Macao Education and Youth Bureau (DSEDJ) for new initiatives focused on the nurturing of youth and on parenting education.

The collaboration with DSEDJ is part of Sands China’s continued commitment to local talent development and enhancing team members’ quality of life.

Around 300 team members attended the signing ceremony at The Parisian Theatre, where Lou Pak Sang, the director of DSEDJ, and Wen Hongyan, Sands China’s senior vice president of human resources, signed letters of intent for two collaborative projects: a Stage Technology and Event Production Course and a Parenting Education Programme. The signing was witnessed by Secretary for Social Affairs and Culture Ao Ieong U, Deputy Head of the Department of Education and Youth Affairs of the Liaison Office of the Central People’s Government in the Macao SAR Xu Ting, and Sands China Ltd. President Dr. Wilfred Wong.

Lou said: “We are very glad to have signed letters of intent for collaborative projects with Sands China, and to develop more versatile talents under the guidance of the company’s professional stage technology team, creating more job choices for young people in Macao. We are also very happy to see that Sands China, as one of the largest private corporations in Macao, has proactively promoted parenting education among its team members, which will increase their happiness and help build social and family harmony.”

The signing ceremony was followed by a seminar on parenting education, conducted by Lou, marking the first time a director of the DSEDJ has offered a seminar. Entitled Sands China Parenting Education Series – A Person’s Moral Character, it aimed to enhance team members’ understanding of how their children are influenced in areas like behaviour, verbal expression, decorum and network literacy.

Dr. Wong said: “At Sands China, we spare no effort in talent development, and are very pleased to be collaborating with the Macao Education and Youth Bureau to equip youth with stage technology and event production skills by making use of our world-class entertainment facilities and technical team. Furthermore, we care about team members’ physical and mental health, and it is therefore our hope to promote family harmony through the parenting education initiative, thereby propelling the development of local community.”