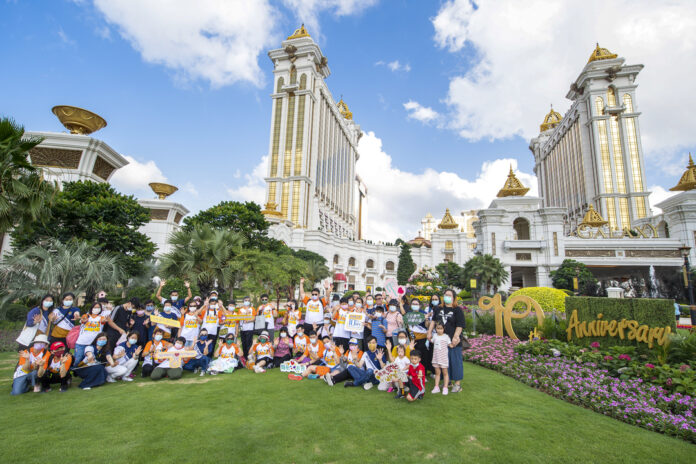 In celebration of the 10th anniversary of the opening of its flagship property – Galaxy Macau, on May 15, GEG invited families from the Macau IC2 Association and the Love and Joy for Macau Children Association for a treasure hunt at Galaxy Macau, during which participants explored and experienced Galaxy Macau’s different world-class facilities, and enjoyed a joyous day with GEG.

Over 50 members from the associations were joined by GEG volunteers for the treasure hunt at the Grand Resort Deck on the day of Galaxy Macau’s 10th anniversary. The activity brought lots of joy and laughter to the participants, who were tasked with different delightful challenges, including solving the various idioms and finding the different plants and natural resources that are located at the Grand Resort Deck.

Following the treasure hunt, the group visited other popular check-in locations inside Galaxy Macau, including the Diamond Lobby where the participating children enjoyed the “Fortune Diamond 10th Anniversary Special Edition” show and watched in fascination as the 3-metre tall diamond descended into a roulette-designed fountain. In addition, they also reviewed Galaxy Macau’s spectacular 10 years at the anniversary-themed installation at the Diamond Lobby and took a group photo at the Galaxy Macau 10th Anniversary Garden located outside the property. Their wonderful journey to Galaxy Macau ended with the special 10th anniversary refreshments that GEG had prepared for them at the Cafe de Paris Monte-Carlo.

To commend team members for their enthusiasm and dedication, GEG issued 10 years or 15 years of long service certificates to almost 5,000 team members who have been working at GEG for 10 years or more.

In addition, GEG organized family tours to introduce Galaxy Macau’s back-of-house areas to team members’ families, which were participated by more than 200 team members from over 30 different departments and their family members. Through the family tours, GEG hopes to share the joy of the anniversary, deepen their family members’ understanding of their working environment and promote family relationships.

Other internal celebration activities included: “Your Best Moments at Galaxy Macau” Photo Campaign, in which team members uploaded their photos taken at Galaxy Macau to get the chance to win prizes; Asian Heart Ambassadors appreciation events; the “Anniversary Feast” where celebratory dishes were prepared and GEG executives served team members; as well as a host of game booths and instant photo shooting areas at the back-of-house.