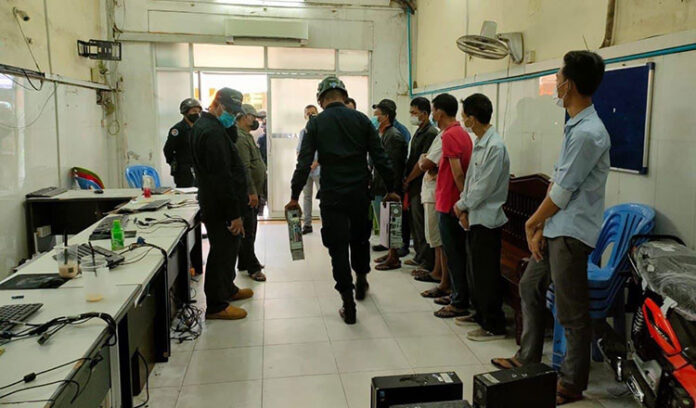 Cambodian police have cracked down more than 10,000 illegal gambling sites and arrested over 200 people over the past month, the National Police confirmed.

Speaking at a press conference on “The achievements of the Ministry of Interior over the past five years,” National Police spokesman Lieutenant General Chhay Kim Khoeun said, quoted by the Khmer Times,  that authorities had raided more than 10,000 suspected illegal gambling operations nationwide, enforcing the law at 127 locations in 11 provincial capitals and other areas and sending 273 people to court.

“From September 15 to October 13, authorities raided the suspected locations and took legal action against 127 locations. Authorities have collected evidence to send to court and build a case against 273 people, including 56 foreigners representing 11 nationalities,”  Lieutenant General Kham Khoeun said, reported by the Khmer Times.

The National Police spokesman added that the other locations under suspicion of illegal gambling didn’t have enough concrete evidence to build a case, but authorities instructed the establishments’ owners and made them sign a contract not to engage in gambling.

“Cambodia has had a law governing gambling for a long time, but the authorities have been unwilling to crack down on illegal gambling at all,” Heng Kim Hong said, further arguing that illegal gambling is a major cause of social unrest and crime in Cambodia.

“In order to effectively prevent illegal gambling, authorities must fully implement the law, especially bringing to justice the ringleaders,” the Head of Research and Advocacy Programme of Cambodian Youth Network Association said.

Prime Minister Hun Sen recently ordered a strict crackdown on the scourge of “anarchic” illegal gambling nationwide and warned of reprimanding officials who fail to implement his instructions.