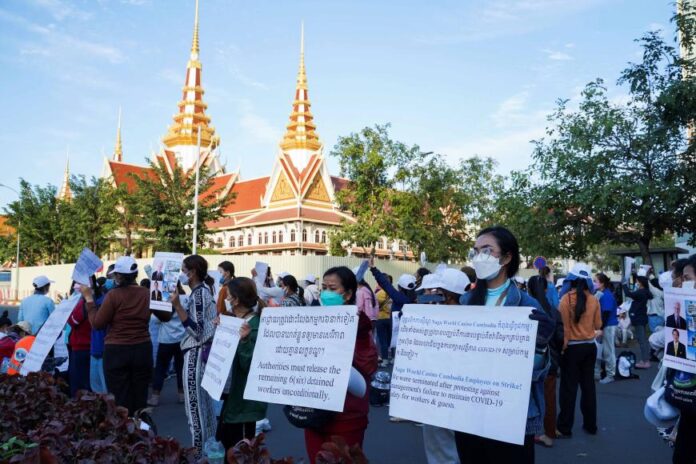 Cambodia’s government is abusing public health measures to crack down on workers’ rights to strike and other basic freedoms, Human Rights Watch said, referring to the treatment of NagaWorld employees who are protesting staff layoffs.

“The Cambodian authorities are stooping to new lows by bringing criminal charges in the guise of public health measures to end a strike,” said Phil Robertson, deputy Asia director at Human Rights Watch in a statement. “The government’s persecution of union activists appears aimed at blunting the growing unity and strength of Cambodia’s union movement and their support for the NagaWorld strikers.”

The human rights watchdog said the latest government action included the arrest of six union members at NagaWorld as they left a Covid testing site, who were then charged with obstructing government pandemic measures.

Three were subsequently released, but three were charged and could face up to five years in jail. They have been placed into a pre-trial detention center, which the organization said was at 170 percent capacity in November 2020. It gave no more recent figures.

The workers are demanding the reinstatement of 365 employees, who were let go in a mass layoff of 1,329 workers last year.

The government has called the strike illegal and has accused the leaders of “incitement.”

Nagacorp, operator of the resort, has stressed that union membership has played no part in its downsizing decisions.

The company released statistics that showed that it has reduced its employee headcount from 8,371 at the end of 2020 to 6,181 by the end of 2021. It said union membership had dropped from 3,976, or 47 percent of the total to 2,572, or 42 percent, showing little change in the overall level of unionized workers.