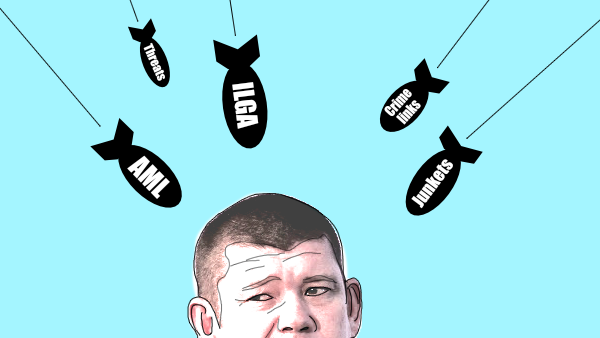 To say that the Crown Sydney probity hearings haven’t gone well would be an immense understatement: A better description would be “unmitigated disaster.” Governance at Crown Resorts has been made to look ridiculous, and billionaire James Packer last week made an unenviable transition from being merely a controversial figure to becoming a toxic presence threatening to drag the entire Crown Resorts empire into ruin.

The New South Wales Independent Liquor and Gaming Authority (ILGA) inquiry was called to investigate revelations by various Australian media outlets last year about Crown’s partnerships with the junkets tasked with bringing Chinese high rollers to its casinos. At stake is the A$2.2 billion (US$1.6 billion) Crown Sydney complex, the city’s tallest building, approved in 2013 and scheduled to open this December.

But if a probity hearing is all about determining whether or not a business possesses the moral fitness and the culture of compliance necessary to operate a gambling enterprise, there is probably no one who can argue that Crown Resorts’ performance before the ILGA inquiry came anywhere near meeting the test.

Even Packer himself clearly realized that his appearance had been a calamity, acknowledging that it would no longer be possible for him to play an active role at the firm, saying, “I think caps on shareholdings may be something that you will think about. I think this has been a terribly painful and terribly shocking experience for the board, as it has been for me. I won’t be going on the board again. I think the board will be more independent than it was in the past.” That, too, may be an understatement.

One of the core revelations that have emerged from the hearings was that Packer, by virtue of his 36 percent shareholding, contacts, and forceful personality, had been driving many aspects of company policy even after he left the board, and when he theoretically shouldn’t have been receiving the privileged information and decision-making role that he was.

It was also Packer, we learned, who was the “driving force” behind the controversial partnerships with junket operators, though he blamed his company executives, by name, for failing to manage the operations properly.

Packer also declined to take responsibility for his own personal threats against an unidentified businessman. While he described his own actions as “shameful” and “disgraceful,“ he ultimately felt that it wasn’t a reflection upon his personal character. “My medical state is what it reflected most on,” Packer asserted.

He did, however, acknowledge that he should have made a public announcement about his mental problems, revealed last week to be bipolar disorder, when he resigned as chairman in August 2015, but still remained on the board.

Commentary in the Australian media has rightfully been acid, and the calls for a major shakeup at Crown Resorts have become nearly universal.

As the Sydney Morning Herald put it, “The evidence… from billionaire businessman James Packer about his behaviour as director and principal shareholder at Crown Resorts leaves no doubt that fundamental change is needed if the company is to continue to operate casinos in Melbourne, Perth, and soon Sydney.”

The Australian Financial Review added, “At the very least, if Crown wants to keep its licence, its existing management must be replaced and it must accept much more rigorous and intrusive regulation.”

As the new week dawns, the ball is very much in Crown Resort’s court. To what degree can they separate themselves from the now-toxic James Packer? What actions will they take to salvage their license to open Crown Sydney… or perhaps even to keep their operations in Melbourne and Perth, where sleeping regulators are also beginning to awaken? We intend to watch closely.