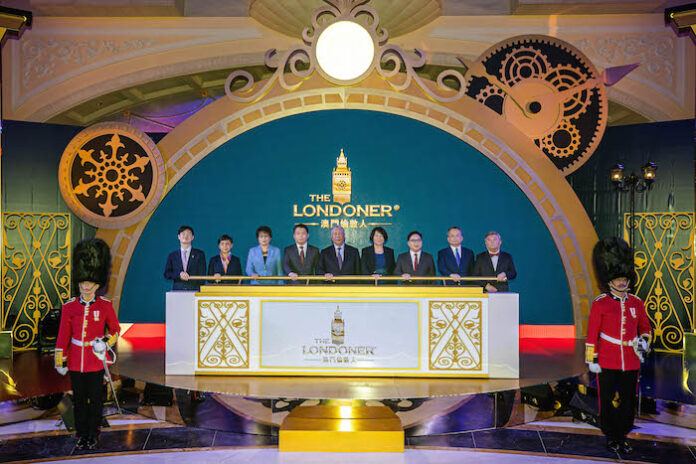 Sands China opened its $1.9 billion “The Londoner” on Monday, providing a vote of confidence in the Macau market’s recovery.

In an opening ceremony, Sands China President Wilfred Wong paid tribute to company Chairman and CEO Sheldon Adelson who died last month and whose vision transformed Macau’s Cotai strip. He also said he believed the Londoner would become another icon for the gambling hub.

“Like The Venetian and The Parisian before it, The Londoner Macao will become an instant landmark on Cotai, with unmistakable design features like the Houses of Parliament and the 96-metre-tall Big Ben,” he said. “And seeing the Changing of the Guard will be a must-see experience just as taking a ride with a singing gondolier is at The Venetian Macao.

“The Londoner project is a 1.9-billion-US-dollar investment into Macao and demonstrates our faith in the future of the city. It is part of our continuing contribution to the transformation of Macao into a world centre of tourism and leisure.”

The property is a revamp of Sands Cotai Central into a London-themed resort. On Monday, the company unveiled the first phase featuring a Victorian-style glass atrium, dubbed Crystal Palace. It also introduced new dining options, interactive London-themed attractions, and the opening of The Londoner Hotel – an all-suite tower featuring approximately 600 luxury suites. Other attractions will be rolled out during the course of 2021.

The opening comes at a delicate time in Macau’s recovery from the Covid-19 pandemic. Visitation had been improving strongly over the Christmas and New Year holidays, but has tailed off into February due to increased restrictions on the Mainland due to new virus clusters.

Analysts who follow the market are expecting the Chinese New Year holiday to be lacklustre this year, with Beijing actively urging its citizens to stay at home.

It also comes as Beijing steps up its efforts to target overseas casinos that seek to woo its nationals. Although the warnings are not thought to refer to Macau, the junket sector is likely to be in the cross hairs further restricting the VIP market.

Analysts still expect a strong recovery in the second half of 2021 as vaccines are rolled out and travel restrictions are eased.

Monday’s opening ceremony was attended by high level government officials from both the Mainland and Macau, including Edmund Ho Hau Wah, Vice Chairman of the National Committee of the Chinese People’s Political Consultative Conference; Mr. Lei Wai Nong, Secretary for Economy and Finance of the Macao SAR; Ms. Yan Zhichan, Deputy Director of the Liaison Office of the Central People’s Government in the Macao SAR.

The ceremony also included a tribute to Sheldon Adelson, the company’s founder who passed away last month.