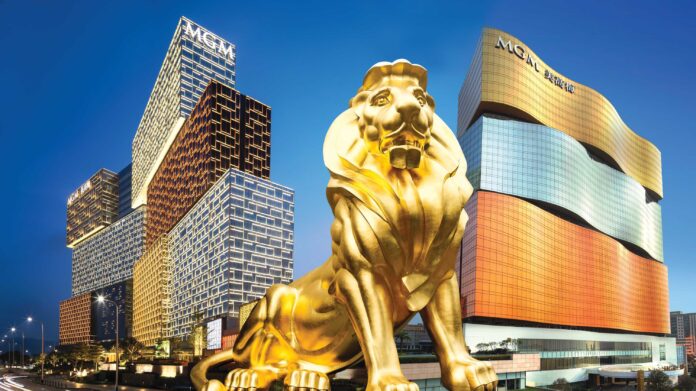 First-quarter market-wide GGR was down by 25% year-over-year to MOP17.8 billion while daily GGR was at 25% of 2019 fourth-quarter pre-pandemic level, MGM China Holdings Limited announced in a filing for the first quarter of 2022.

Macau and Greater China continued to be under the severe impact of the COVID-19 pandemic in 2022. MGM experienced demand pick-up during CNY. Visitation to Macau increased 26% year-on-year during the six-day holiday period. MGM saw growth of rated mass player count and table volume across both properties while hotel occupancy reached 93% for MGM Macau and 72% for MGM Cotai.

First-quarter market-wide GGR was down by 25% year-over-year to MOP17.8 billion. Daily GGR was at 25% of 2019 fourth-quarter pre-pandemic level.

MGM China saw first-quarter daily GGR at 35% of 19Q4 level, outperforming the market given its strength in the premium segment. In the same period, MGM China grew market share to 13.3% compared to 11.5% a year ago.

MGM Macau recorded revenue of HK$1.2 billion (21Q1: HK$1.3 billion) and an adjusted EBTIDA of HK$153 million (21Q1: HK$170 million). MGM argues it holds the best performing mass gaming property on the Peninsula, boasting the highest mass table win since May 2021. Hotel occupancy was at 73% for the Period.

However, with the widening pandemic outbreaks in mainland China during the quarter, many Chinese provinces have imposed lockdown measures as well as enhanced travel and border controls. Macau had also tightened requirements for inbound travelers. These all resulted in a decline of Macau’s gross gaming revenue (GGR).

On March 3, the Macau Government announced their intention to extend the term of Macau’s six concession and sub-concession contracts for six months until December 31, 2022 and invited the concessionaires and sub-concessionaires to submit a formal request for the extension. On March 11, MGM submitted its request for the extension along with a commitment to pay the premium to the Macau Government.

Kenneth Feng, President, Strategic & Chief Financial Officer of MGM China said: “We will continue to work with the government on ‘retendering’ as Macau is an important part of our future. We look forward to further promoting the long-term development of Macau’s gaming industry and supporting the government’s tourism and diversification goals for the region.”

The Group will maintain focus on understanding and addressing the needs of our customers. “We strive for ongoing improvements over our gaming floors, product offering and services. We believe that once demand returns, we are well-positioned for growth, particularly in our premium mass and mass segments,” said Kenneth Feng.

As of March 31, 2022, the Group had total liquidity of approximately HK$12 billion, comprised of cash and cash equivalents and undrawn revolver.