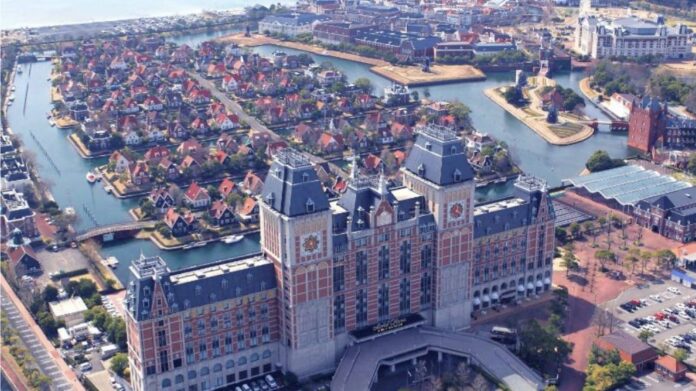 A consortium of public institutions is being formed in Nagasaki Prefecture to support the education of young people who may eventually work at the prospective IR at the Huis Ten Bosch theme park or in related industries such as hotel and MICE.

The grouping, called “Consortium to Promote the Development of International Tourism Personnel” in direct translation from Japanese (there is no official English name available yet), is being launched by four constituent members—Nagasaki International University, the University of Nagasaki, the Nagasaki prefectural government, and the Sasebo municipal government.

It may be expanded to other institutions in the Kyushu region in the future.

A non-public meeting was held between about twenty officials at the end of last week to begin the preparatory discussions, which focused on the organizational structure needed to create a common base for human resources development.

Hideya Inoue, an academic specialist in international hotel management and dean of the Department of International Tourism at Nagasaki International University was appointed chairman.

The official launch of the organization will come only if Nagasaki’s bid to host an IR is accepted by the central government.

It was reported in February 2020 that Nagasaki International University was mulling the establishment of an IR management course at the prodding of the Nagasaki prefectural government. This consortium appears to be a further elaboration of that plan.

In the summer of 2018, the University of Macau’s Global Leadership Development Program conducted an IR management course for about sixty students in Nagasaki, including local Japanese businesspeople and government officials, as well as some students from Macau, which was attended by Nagasaki Governor Hodo Nakamura. Sasebo Mayor Norio Tomonaga also visited the University of Macau shortly afterwards to promote the link.