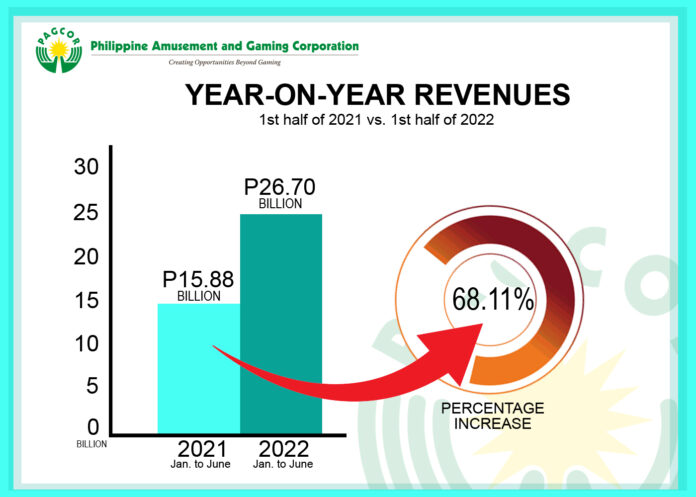 “Said amount was also 9.39 percent higher than the agency’s revenue target of P24.40 billion for the first six months of this year,” the PAGCOR release read.

The promising gaming outlook in the country was fueled by the easing of community quarantine and travel restrictions, increased vaccination rate among gaming personnel and guests, and implementation of strict health protocols in all PAGCOR-operated and regulated gaming venues, the agency release read.

Majority of the share in Philippine’s GGR for 2Q22 was posted by the licensed casinos, which is 80 percent of the total marketshare, whereas 13 percent revenues came from Other licenses, and balance 7 percent came from PAGCOR operated outlets.

Whereas in terms of percentage growth on QoQ basis PAGCOR operated casinos led the pack, followed by Licensed Casinos vertical and other licensed operators – mainly the electronic gaming operators.

Outgoing PAGCOR Chairman and CEO Andrea Domingo said earlier that “the gaming industry is poised for growth after the country eased movement restrictions and prompted pandemic-affected businesses to re-open.”