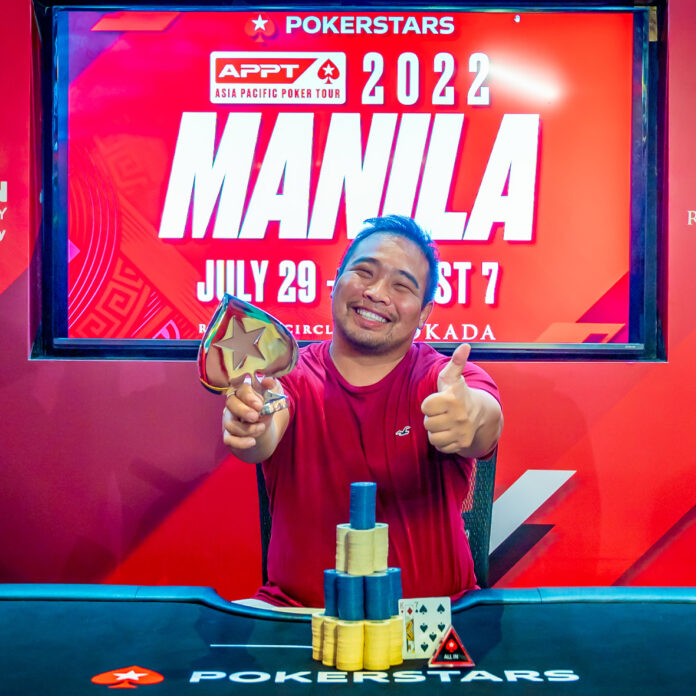 Tang defeated the Philippines’ Conrad Lumaban heads-up to claim the trophy, his maiden PokerStars LIVE title and the lion’s share of the ₱10,179,180 (~$183,845) prize pool.

Feng extended this still further just minutes into the final table, sending Ashish Munot to the exit in ninth place for a ₱163,180 payday after the Indian player’s ace-queen lost a race to the Singaporean’s pocket tens.

It took close to a full 40-minute level until the next elimination. It was Vietnam’s Duy Tung Nguyen the man on the chopping block, exiting at the hands of Day 1B chip leader John Tech after the latter turned a straight versus Nguyen’s flopped top pair. Nguyen earned ₱300,000 for his seventh-place finish.

Mike Takayama was the next man out, falling midway through the same level Nguyen departed. Takayama moved all-in pre-flop with king-queen offsuit and ran into the ace-jack of Feng, who paired his ace on the flop to further extend his lead and send the Filipino out in sixth for ₱410,000.

The start of the next level saw the next elimination, with John Tech falling at the hands of Feng. Tech got the last of his chips in pre-flop holding ace-nine suited, but could not beat Feng’s ace-queen offsuit and departed in fourth place for ₱665,000.

However, two big clashes between top two stacks Feng and Tang saw the former’s title dreams go up in smoke and Tang seize the chip lead, although it was Lumaban the man to send Feng to the rail in third place for ₱860,000 to take play heads-up.

Tang came into the heads-up confrontation with a commanding 3-to-1 chip lead he did not relinquish.

While Lumaban made a spirited attempt at the title after some cagey back-and-forth play, Tang had all the momentum.

Tang celebrated with his watching rail before posing for the obligatory winner’s photo, while Lumaban was forced to settle for the ₱1,200,000 on offer for second place.