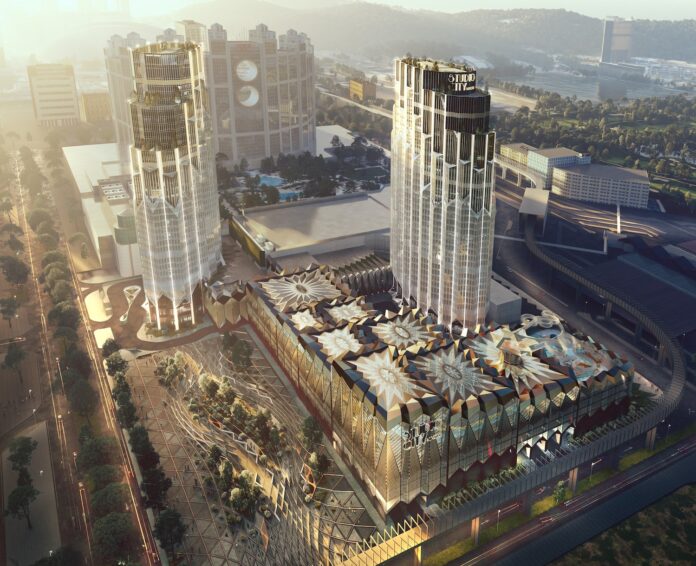 Melco Resorts & Entertainment held a topping out ceremony for its $1.3 billion Studio City Phase 2 project, which it says is on track to open by the end of next year.

The project was designed by international architecture firm Zaha Hadid Architects, who were also responsible for the Morpheus Hotel at Melco’s City of Dreams resorts.

“Melco has a strong track record of contributing to Macau’s ongoing development as a world center of leisure tourism,” Melco CEO Lawrence Ho said at the ceremony. “Studio City Phase 2 reaffirms our ongoing commitment to the city and contributes to reinforcing Macau’s non-gaming proposition in Asia and internationally. We are grateful for the support of the Central and Macau governments during the project construction.”

With a total gross floor area of approximately 250,000 square meters, Studio City Phase 2 is located in the Cotai area of Macau, comprising two luxury hotel towers with 900 rooms and suites, a retail complex of over 21,000 square meters and gaming space of over 2,300 square meters. It has also been named winner of the ‘Regional Award, Asia’ at BREEAM Awards 2021 in recognition of its incorporation of sustainable building design, development and management. Studio City Phase 2 is progressing on track for completion before December 27, 2022.

Studio City opened in 2015 and was the first in Macau to debut without VIP gaming. On opening, its gaming floor had 200 mass tables, and about 1200 slots and ETGs.

David Sisk, Chief Operating Officer of Macau Resorts, Melco, said, “Since opening in 2015, Studio City has become a destination landmark in Macau with its unique entertainment theme and experience. The extension project will complement our existing offering of ‘next-generation’ world-class entertainment and further enhance the distinctive Studio City experience.”