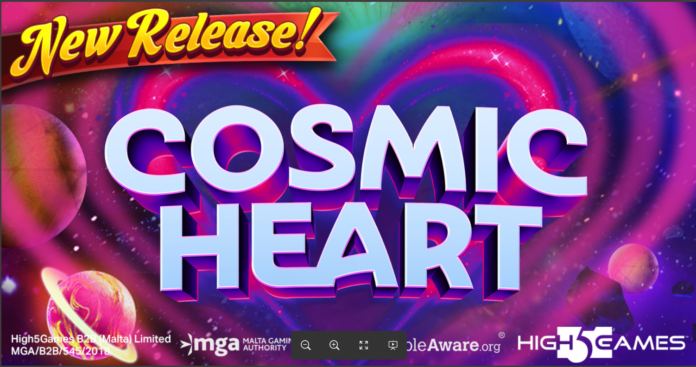 Colliding stars create a universe of prizes in High 5 Games newest release. Players can use the brand new Prize Line feature to orbit space until they find their cosmic win!

Joining its extensive range of game themes, the latest release to the company’s library is an outer-worldly journey, loaded with a universe of features. The new galactic-themed slot game takes players on a cosmic experience to activate different ways to win with the Prize Line.

Cosmic Heart’s Prize Line feature is unlike any other game feature in the H5G portfolio. The game will launch on High 5 Casino for real money and social play starting on Thursday, October 15th, and will be globally available on to H5G’s entire network of partnering operators through the supplier’s gaming platform, VAULT, on Tuesday, October 27th.

“We’ve designed Cosmic Heart to be a game that takes player anticipation to new heights,” said Phil Welty, Head of Game Design at High 5 Games. “The Prize Line above the reels displays a large rotating assortment of exciting features, which can each be won by landing a heart symbol on the corresponding reel.

These features persist for multiple spins and can scale up to huge potential values, putting the prospect of winning big front and center for the player for extended periods of time. We’re very excited for players to finally get the chance to experience all of the variety and excitement we’ve packed into this game!”