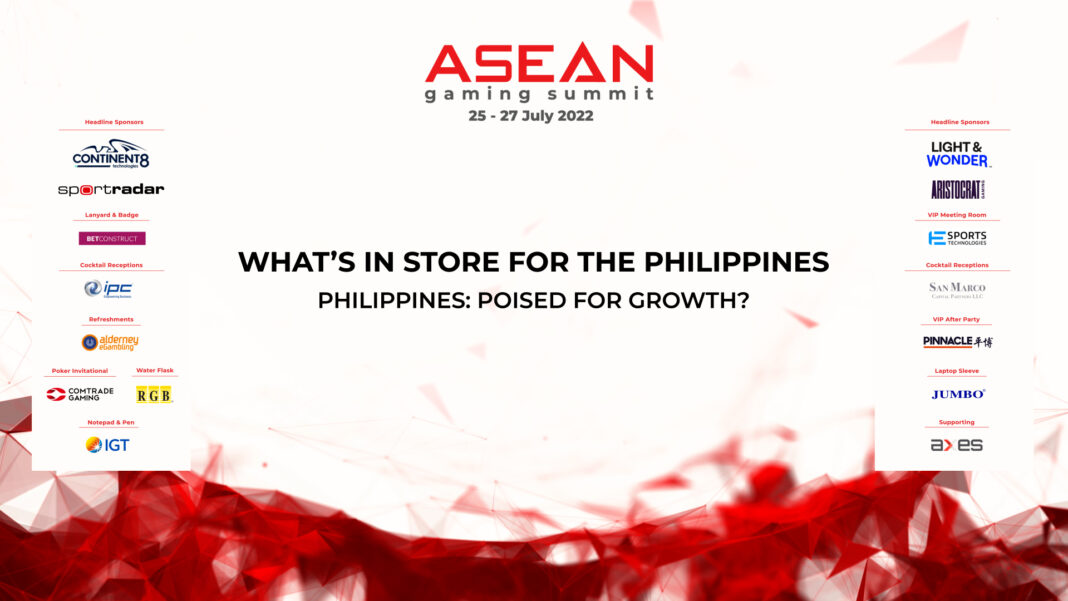 It’s just a week now until the ASEAN Gaming Summit 2022 returns to the Philippines, which is expected to be one of Asia’s top performing jurisdictions with forecast gross gambling revenue of PHP65 billion ($1.15 billion).

The conference will be the first major industry event in Asia since Covid and will kick off on Monday 25th with pre-conference workshops examining how well the region’s tourism markets are recovering since reopening borders.

The Philippines opened its borders to international tourism in February, and reported more than 300,000 arrivals in the first two months after opening, according to the most recently available figures.

Some other regional markets seem to be enjoying a stronger bounce back, with Singapore for example expecting a strong second half to help boost tourism numbers to between four and six million in 2022.

However, the Philippines is one of the few countries in Asia where locals are allowed to gamble and the industry has enjoyed strong support from domestic visitors while borders have been closed and travel restricted. Last year domestic trips surged 38.1 percent to more than 37 million.

In the first quarter of this year, the Philippines’ generated PHP39.15 billion in gross gambling revenue, with PAGCOR chair Andrea Domingo seeing that figure rising to PHP65 billion this year, short of 2019, but beating its 2018 performance.

The pre-conference agenda also includes a special workshop by marketing expert Sudhir Kale, founder of GamePlan Consultants, who will walk participants through the art of service blueprinting to improve customer experiences and loyalty.

ASEAN’s main conference agenda will kick off on Tuesday 26th and will be dedicated mainly to the land-based industry.

As well as panel sessions exploring the future of the industry in the Philippines and how Asia’s IRs may need to revamp their offering post-Covid, we will hear from a series of property presentations from operators around the region.

These will include the newly opened NUSTAR Resort & Casino on Cebu. It’s the first true integrated resort on the island, which is one of the Philippines’ top holiday destinations.

We will also hear from Emerald Resorts, which has another IR in the works for Cebu and which recently announced that Bloomberry Resorts is planning to invest in this project, as well as a separate property planned for the Clark Freeport Zone.

No financial or other details have yet been released.

Our property updates will be rounded out by Thunderbird Resorts, which operates two regional casinos in the Philippines and by NagaCorp, Cambodia’s largest casino operator, which has a monopoly within 200km of the capital Phnom Penh.

ASEAN’s key note address on day one will be given by Earle Hall, CEO of AXES.ai. A well-known futurist and tech entrepreneur, Hall will discuss gaming industry will evolve on the back of digital technology – including cashless gaming, blockchain, and the metaverse, which will change the face of everything that makes gaming, entertainment and travel.

Another panel of expert speakers will also address the subject of cashless, with a focus on why the casino industry has been such a laggard in adopting digital technologies and whether this will change.

Day 2 will be devoted to the online industry in Asia. Covid has prompted some fairly seismic changes with the Philippines leading the way in regulating online gambling for its domestic market to make up for lost revenue from the closure of land-based casinos.

Industry participants have welcomed the move and see great potential in the industry, but there is much scope for improvement to allow them to compete on a level playing field with the rampant illegal market. Eradication of illegal online gambling in the country was another of the main reasons, the government of former President Rodrigo Duterte moved to allow PIGO licenses.

Elsewhere around Asia, some other jurisdictions are also evaluating whether they will move to regulate online gambling. We hear from Fred Gushin, managing director of Spectrum Gaming about which jurisdictions may take a more liberal approach.

As well as regulation, attendees will also hear discussions on cyber security, the use of crypto in online gambling, affiliates and more.