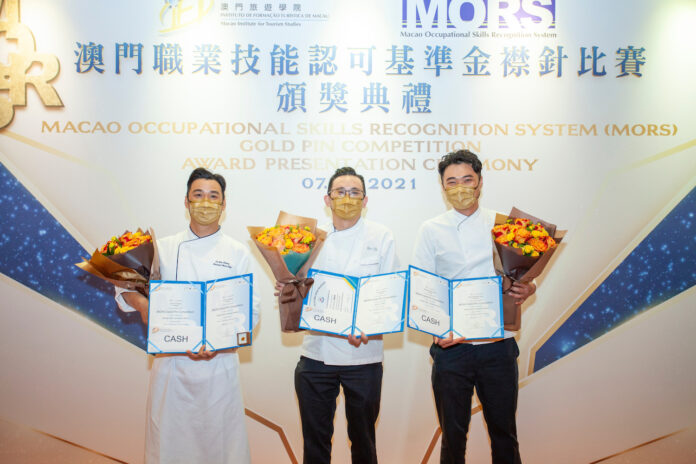 A professional honor recognized by the local hospitality industry, the Competition provides a platform for contestants from various disciplines to showcase their professional skills and pit their talents against the best in the industry.

There were 10 categories to this year’s competition, which, attracted elites from various organizations in the local tourism and service industry. After two rounds of elimination, seven Galaxy team members reached the finals with their extraordinary performance and profound knowledge, among them, Mr. Bong Ming Han James, Executive Sous Chef from Galaxy Macau™; and Mr. Lei Wai Cheong, Chef de Cuisine from StarWorld Hotel, garnered the two Gold Pin Awards in the category of Chinese Chef (Cantonese Cuisine).

In addition, Mr. Ng Choon Kiat, Executive Sous Chef of Galaxy Macau, also took the Gold Pin Award in the category of Western Chef, and was presented the line level certificate by the American Hotel and Lodging Educational Institute (AHLEI). Each winner was also awarded a lapel of MORS Gold Pin, a certificate, a cash prize of MOP8,000 and a sponsorship of MOP2,000 for continuing education courses.