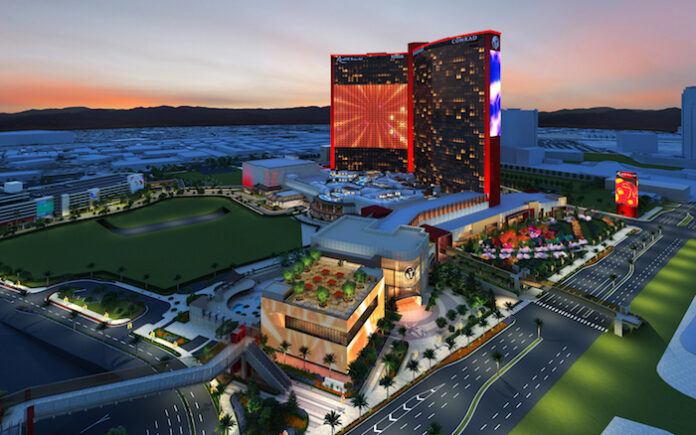 Genting’s $4.3 billion Resorts World Las Vegas remains on track to open this summer and says it has received strong local support and excitement about the opening from potential patrons.

The resort will be the first new resort to be built on the Las Vegas Strip in more than a decade and property president Scott Sibella says that may give it the edge over neighbouring premises.

“We have a natural advantage to create the cleanest, safest resort experience in Las Vegas chalk full of new experiences simply because today’s technology and advancements didn’t exist ten years ago,” he told AGB in an email.

“Construction continues to move forward and we are on track to open this summer,” he said. “Throughout the pandemic, our focus has always been on and continues to be on things we can control, our development, our plans and how we can offer visitors and team members a safe and healthy environment with a focus on the guest experience.”

He stressed all venues within the resort will open in line with required health and safety guidelines.

Las Vegas had expected to be slower to recover than regional gaming markets in the U.S. due to its reliance on large-scale MICE business and air travel. However, in recent weeks, since the easing of some restrictions, operators have noted strong pent up demand.

Morgan Stanley has upgraded Caesars Entertainment and MGM Resorts to overweight from neutral after a trip to Sin City indicated that a swift recovery was actually underway.

“While we thought it was because of Spring Break & March Madness, numerous market participants told us their bookings were stronger than current occupancy, booking windows were extending and continued to build,” analyst Thomas Allen wrote, as cited by Seeking Alpha.

The strong demand bodes well for the opening of what will be the most expensive resort on the Strip.

“Las Vegas is a destination that people prioritize when planning leisure and business travel and we have seen that with travelers returning domestically,” Sibella said. “We have received a tremendous response from the local community and future patrons about their excitement surrounding our opening and believe that excitement will translate into future visitation for the city,” Sibella said.

The resort will feature 3,500 guest rooms with three of the Hilton Hotels & Resorts premium brands. These are the Las Vegas Hilton, Conrad Las Vegas and Crockfords Las Vegas, an ultra luxury brand. It will include 40 food and beverage options, including a Singapore hawker-style street food concept.

While its nightlife offerings include Singapore’s Zouk Club and announced residencies from Katy Perry and Celine Dion.