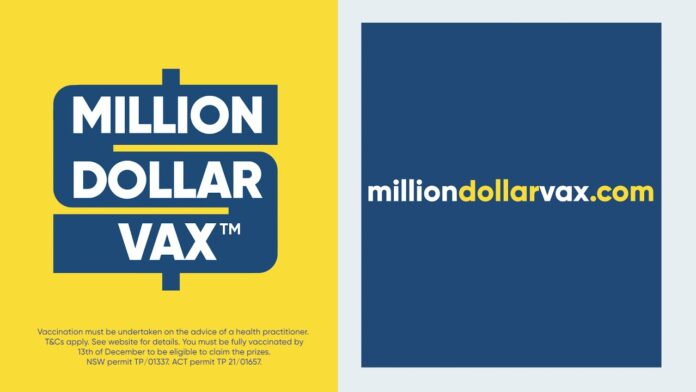 In the next few months, as Australia strives to reach vaccination targets, those most at risk will be people living in locations with low vaccination rates, older Australians, and people with disabilities. Million Dollar Vax has been launched to reward those that have been or who get vaccinated during October 2021.

In Australia, the states of New South Wales and Victoria have endured extensive lockdown periods. Victoria is currently in the sixth period of lockdown and this weekend its capital city, Melbourne, will mark a total of 250 days of lockdown since the beginning of the pandemic. According to estimates by KPMG, every extra day of lockdown costs more than A$370 million per day in Victoria and NSW alone.

The Million Dollar Vax campaign is similar to campaigns rolled out internationally, including in the US and Europe. The total prize value for the Promotional lottery is AUD$4,100,000. Entry is available to all Australian residents (18yrs or older) who have had at least one COVID-19 vaccination by the end of the Promotion Period, which will extend throughout October 2021. In order to receive a prize, draw winners will need to be double vaccinated on or before 13 December 2021.

In the US and Europe, vaccination lotteries have largely been the initiative of and funded by governments. Some campaigns have involved a collaboration of government and corporations such as in New York, which was a joint initiative between corporates Kroger and CVS Health in collaboration with the Biden administration. The Million Dollar Vax campaign in Australia has been created by the Million Dollar Vax Alliance – a group of Australian philanthropists and corporations.

The Million Dollar Vax campaign has been set up as a national trade promotion lottery. A trade promotion lottery involves activities or events where prizes are given away through any means that include an element of chance at any stage. Entry must be free or involve only a minimal charge. Unlike other international jurisdictions, in Australia, trade promotion lotteries are regulated on a State and Territory basis and requirements in each jurisdiction vary. The Million Dollar Vax initiative was complex and required considerable engagement with State and Territory regulators in order to be able to launch a national COVID-19 vaccination lottery.