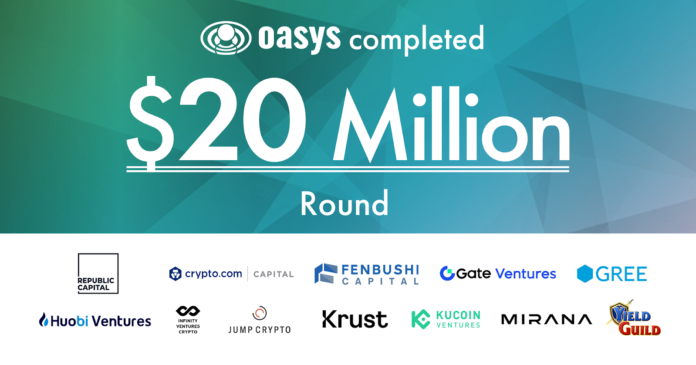 Oasys, a blockchain developed specifically for the gaming community, announces that it has completed a successful private token sale round of USD20 million led by blockchain financing and investment platform, Republic Capital, with participation from Jump Crypto, Crypto.com, Huobi, Kucoin, Gate.io, bitbank and Mirana Ventures.

Oasys is a new blockchain project based in Japan and Singapore, established with the mission to create better blockchain gaming experiences for players. The company is working on innovative solutions to solve the prevailing challenges of slow transaction speeds, high gas fees and unoptimised interfaces inherent in Web3 gaming, while building a scalable crypto-native ecosystem for game developers, Web3 experts and blockchain gaming guilds.

Oasys enjoys strong institutional support and some of the initial validators on its blockchain include the likes of Bandai Namco Research, SEGA, Ubisoft, Netmarble, Wemade, Com2uS and Yield Guild Games, one of Asia’s most prominent play-to-earn gaming guilds.

The Oasys team is also behind doublejump.tokyo, one of the most successful Web3 game developers from Japan that also recently concluded a USD25 million fundraising from investors including Jump Crypto, Next Web Capital and Protocol Labs. doublejump.tokyo’s major game titles, My Crypto Heroes and Brave Frontier Heroes, were the top blockchain games in both daily active users and sales (over 27,000 worth of ETH sold) since their release in 2018, through to early 2020.

The funds will be used to strengthen partnerships with new and established game developers, digital asset exchanges and other companies within the gaming and crypto ecosystem.

Oasys will also use the funds raised to invest in new marketing and business development initiatives as well as increase its local headcount to meet the explosive growth in mainstream interest around blockchain games.

The private token sale follows a recent Oasys’ strategic collaboration with ConsenSys to build a better-optimised wallet for blockchain gaming.

Ryo Matsubara, Director, Oasys, said: “The unequivocal backing we have received, by many of the leading institutions from both the crypto and gaming world, is a strong mandate for Oasys, as we embark on our mission to transform blockchain gaming experiences. Beyond financial support, this vote of confidence from our valued investors also demonstrates to game developers and other ecosystem partners that our project is well-positioned to capitalise on future growth opportunities in the market.”

Brian Johnson, Partner, Republic Capital, said: “Oasys is shaping the future of blockchain games and leading the charge by bringing legacy gaming IPs on-chain. We believe it was only a matter of time before the gaming giants like Bandai adopted blockchain technology, and are impressed by the domain expertise of the Oasys founders. Republic Capital is excited to partner with the Oasys team and look forward to working closely with the company to execute its vision going forward.”

Oasys will continue its focus on improving user experiences, in collaboration with key domestic and international partners, and contribute to the global expansion of blockchain games, helping to bridge the gap for game developers in entering Web3.