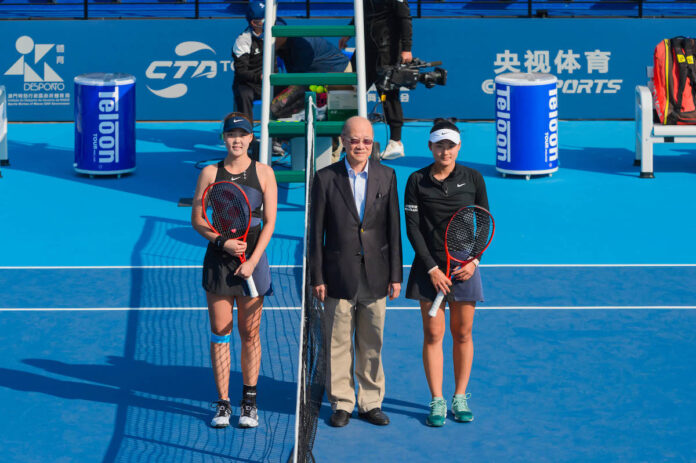 SJM Resorts, title sponsor of the 2021 CTA Tour SJM Professional Finals (Macau) and National Tennis Championships celebrated the success of the 7-day tournament. During the finale on 12 December, SJM Managing Director Ms. Angela Leong presented SJM souvenirs to the Men’s Singles Champion and the first runner-up. Ahead of the Women’s Singles Championship match, Dr. Ambrose So, Director of SJM, held a coin toss to determine which player would serve first.

The celebrations continued off-court in the gardens of Jardim Secreto at Grand Lisboa Palace Resort Macau, where SJM hosted a cocktail event with 200 guests in attendance. Ms. Angela Leong and Dr. Ambrose So presented SJM souvenirs to the Women’s Singles Champion and the first runner-up. SJM souvenirs were also awarded to the Men’s and Women’s Doubles Champions; the runners-up in Men’s and Women’s Doubles; the Best Male Server and the Best Female Server.

The celebratory cocktails marked the successful conclusion of China’s highest-level tennis sporting event and a series of community activities hosted by SJM, including a Youth Talk and a Community Tennis Clinic from 6 to 12 December.

Ms. Daisy Ho, Chairman of the Board of Directors of SJM, said, “We are delighted to support cross-sector integration of ‘tourism + sports’ in Macau by title-sponsoring this mega tennis tournament. We are doubly pleased to extend this sports event to the local community by arranging China’s elite tennis players to meet with students and Macau Special Olympics members. We look forward to hosting this exciting tournament in Macau next year, as we strive to promote further exchange and cooperation in sports between Mainland China and Macau.”