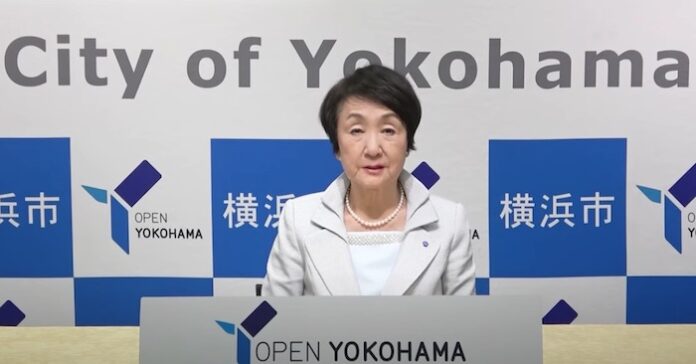 Yokohama Mayor Fumiko Hayashi is effectively violating her promise to respect the results of a popular referendum on IR development.

In mid-October, as citizen activists were engaged in two separate signature-gathering campaigns, one calling for Hayashi’s recall as mayor and another calling for a popular referendum on IR development, Hayashi appeared to give her first acknowledgement that the people of her city might have some choice in whether or not an IR should be constructed. “If a referendum is held and there is much opposition to an IR, I would like to respect the results.” She further clarified that “respecting the results” meant that the IR licensing bid would be dropped.

Thereafter, the recall campaign petered out, falling far short of the needed signature threshold. The argument of recall campaign leaders had been that Mayor Hayashi could not be trusted, and the only way to ensure that an IR was not built would be to remove her from office. However, her comments that she would respect the referendum appeared to undermine this argument, giving additional energy to the competing referendum campaigners.

Despite the pandemic and the dangers to the senior citizens out on the streets gathering signatures, the referendum campaign was a major success, within the prescribed two month period gathering 190,000 valid signatures, more than three times the number needed to trigger such a vote.

However, before the referendum is held it also needs to have authorization from the Yokohama City Council, and this is where the mayor is effectively betraying her mid-October promise to “respect” the referendum.

Ahead of the city council deliberations scheduled for January 6 to 8, the mayor has decided to attach an opinion to the referendum proposal asking that the council vote to reject it.

With jaw-dropping temerity, the mayor is now arguing that the recent establishment by the big business community of the “Yokohama Innovation IR Council” is a fully adequate demonstration of the public will to move forward with the IR bid, and therefore “it is hard to find meaning in conducting a referendum.”

Since the city council is dominated by ruling party conservatives, it is now expected that the motion to conduct the referendum will be voted down on January 8 and the popular will as expressed in the highly successful signature-gathering campaign will once again be dismissed.

This will set the stage for the final showdown, which will now likely come in August during the mayoral elections. While it is highly likely that IR development will be the top campaign issue, perhaps an even bigger question will be whether or not the often-fractious opposition parties are able to unify around a viable anti-casino candidate.