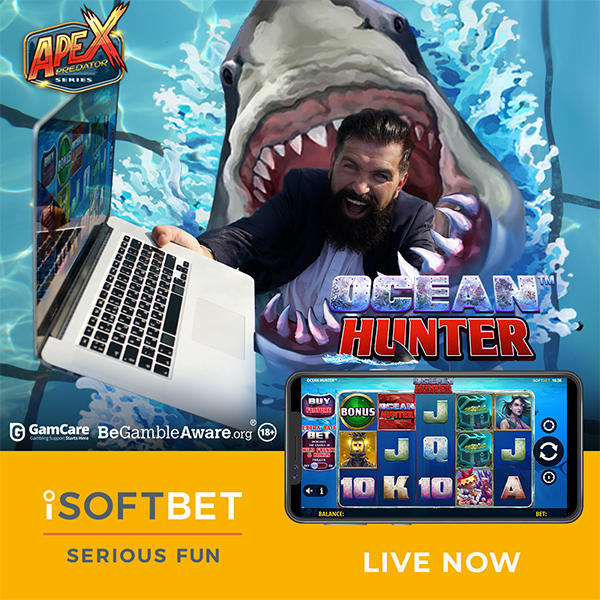 iSoftBet, part of IGT PlayDigital, invites its customers to venture out into open waters in search of lucrative prizes in its latest addition to the Apex Predator series, Ocean Hunter.

Taking place on a 3×5 base game layout, the game is packed with exciting features and mechanics, including the Wild Frenzy shark attack, which sees up to four Wilds added to the reels, each with the possibility of becoming a Wild Multiplier of up to 4x – these multipliers can also add together to create some truly frightening wins.

The Ocean Hunter logo is the top paying symbol in the game, awarding up to 25x the bet for any five-of-a-kind, while male and female divers, treasure chests and sunken loot symbols complete the top half of the paytable.

Bonus symbols on the first, third and fifth reels will trigger Free Spins, where four individual reel sets are in play. At the start of the feature, only the first reel set is active, with the others unlocked by collecting lifesaving oxygen tanks.

When a new reel set is unlocked, extra spins are added and one of the reels, starting with the fifth, will become Wild. Open all 4 reel sets and you will have 4 games with Reels 3, 4 & 5 as fully stacked Wilds on every set, resulting in some jaw-some bonus payouts!

Ocean Hunter is the latest innovative product to be added to iSoftBet’s expansive games portfolio, following popular recent releases Majestic Megaways Extreme 4, Wolf Canyon: Hold & Win and Rise of the Genie as the provider continues to deliver titles that envisage the brand’s personality.

Mark Claxton, Head of Games at iSoftBet, said: “The Apex Predator series was one that sparked real imagination with our first release, Tyrant King Megaways, and we couldn’t be more excited to add a shark-inspired title to the mix, taking players deep into the territory of these fearsome creatures.

“With lucrative multipliers in the Wild Frenzy as well as additional reels that can be unlocked during Free Spins, players are bound to enjoy the exciting theme and potential to trigger huge wins.”iSoftBet is a premium online and mobile casino games supplier and aggregator with ‘Serious fun’ at its heart – delivering amazing experiences to the world’s largest and most successful brands and their players.

SOFTSWISS Is Ready to Heat up the ICE!

‘Every Play is An Experience’ with Aristocrat Gaming™ at ICE 2023

Zitro will showcase its latest innovations at ICE London 2023