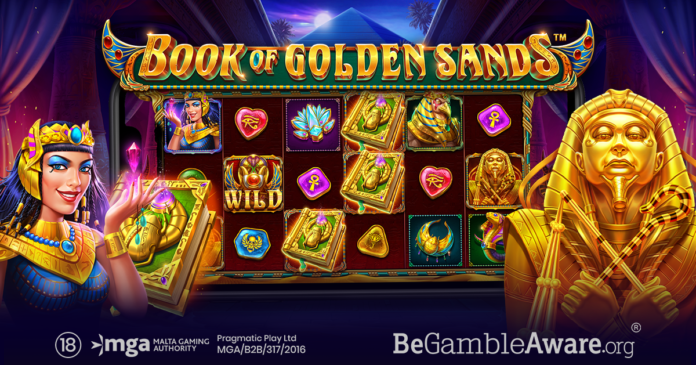 Played across 6×3 reels, the title is home to high-paying symbols depicting Ancient Egyptian gods, Cleopatra and snakes among others that must form matching combinations across the title’s 729 winning ways to award a win.

Wild symbols also fill the reels with a multiplier of 2x or 3x attached to them, these substitute all symbols in game except the scatter symbol making it easier for players to unlock wins.

Landing three or more book symbols in the base game unlocks the free spins round.

Here, a special expanding symbol is randomly selected to be in use throughout the 10 free spins awarded.

Whenever three or more of the special symbol  lands, they expand to cover the entire reel.

Additionally, this adds one of these symbols on top of the reels, any future expansions also connect to this additional symbol and increases the winning potential further.

Book of Golden Sands follows in the footsteps of recent hits such as Striking Hot 5, Happy Hooves and October Fortunes which reside amongst a collection of over 250 titles in Pragmatic Play’s award-winning games portfolio.

Irina Cornides, Chief Operating Officer at Pragmatic Play, said: “We are excited about the launch of Book of Golden Sands™, as we have augmented  and adapted the traditional book-style game that many players are drawn to. We have included wild multipliers, an engaging feature which awards additional ways in the bonus game, and a universally adored Egyptian theme to create a title that we are confident players will enjoy.”

Pragmatic Play currently produces up to seven new slot titles a month, while also delivering Live Casino and Bingo games as part of its multi-product portfolio, available through one single API.