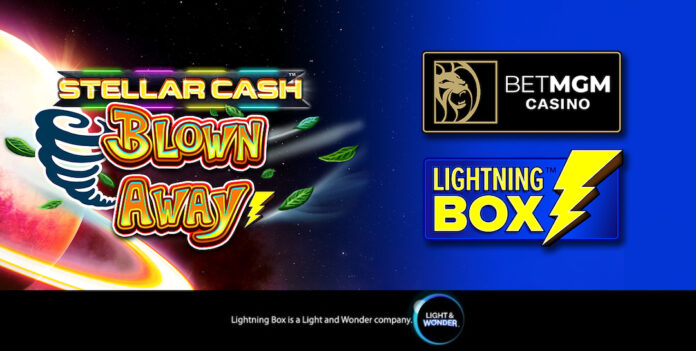 Specialist slot provider Lightning Box, one of Light & Wonder’s in-house studios, has released STELLAR CASH BLOWN AWAY a slot which blends mechanics of an existing hit game, BLOWN AWAY and STELLAR CASH, which is a revamped version of the classic Stellar Jackpot franchise.

This 5×3 reel slot has symbols depicting swans, dinosaurs and monkeys that must form matching combinations across the title’s 25 paylines to award a win. Players are aided in creating these wins by STELLAR CASH BLOWN AWAY’s wild symbol which substitutes all other symbols in game except the scatters.

Additionally, reel five is home to the tornado symbol, once landed this removes the lowest paying symbol in game and awards a respin where the symbol can be landed again. This mechanic is further built upon in the free spins round which is awarded for landing at least three boat scatter symbols.

This awards 10 free spins where each tornado symbol removes the lowest paying symbol and has a chance of awarding an increasing multiplier up to 7x. Similar, to the base game, landing the tornado on spin 10 will award additional respins until no tornado symbols are landed.

The title is also home to the Stellar Cash bonus, unlocked for landing three spaceship symbols attached to any normal symbol in game. The player is transported to space to battle against enemy ships, with them choosing which spaceship to target, picking correctly awards a bounty prize and progresses the player to the next level with increased winning potential.

However, choosing incorrectly will see the player lose one of three lives where the loss of all of these ends the bonus round. In the last level, spaceships will reveal Mini, Minor, Major or Grand jackpot prizes.

STELLAR CASH BLOWN AWAY will first launch in New Jersey exclusively via BetMGM and will be available to customers of Light & Wonder’s industry-leading OPENGAMING™ platform alongside popular new titles such as CRYSTAL VAULT™ and BLOOD AND GOLD™.