Yuji Taniguchi is Komami’s chief games product and strategy officer responsible for the vision, strategy, execution, and leadership of the company’s product portfolio.

He holds a master’s degree of Computer Science from the Tokyo Institute of Technology and an MBA from the University NIMBAS-Bradford in the Netherlands. 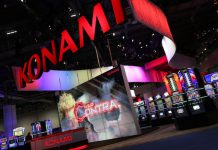 January 4, 2017
Konami Gaming Inc has announced the appointment of Steve Sutherland as its new president & chief executive officer, according to a press release from the company. Sutherland succeeds Satoshi Sakamoto, who transitions to the role of senior executive director of the parent entity Konami Holdings Corporation. “Sutherland has been a fundamental contributor to Konami’s establishment, […]