The Nevada Supreme Court has ruled that meetings with Chinese government officials helped Las Vegas Sands secure a casino concession in Macau, TDM reports. However, the court overturned a $70 million judgement against Sands, which was brought by businessman Richard Suen, who claimed his efforts led to the operator ultimately obtaining its concession. While the […]

Casino operator Las Vegas Sands Corp. has once again persuaded the Nevada Supreme Court to throw out a jury award won by Richard Suen, in relation to claims that he helped Sands secure its license in Macau, local media reports.   On Friday, the state court said there was not enough evidence to justify the […] 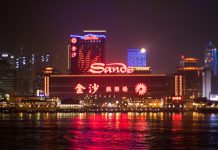 Sands may have paid $96m to settle Macau dispute: report

Las Vegas Sands may have paid $96 million to settle a long-running legal case with Hong Kong businessman Richard Suen over his services to the company in Macau, the Las Vegas Review Journal reports.