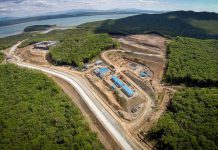 April 19, 2017
Cambodian casino operator NagaCorp is nearing the stage of laying the foundation for the Mayak entertainment complex in the Primorye gaming zone, according to local authorities. “The active phase of the construction began in April as it was planned earlier,” said Andrei Folomeev, a director general of Primorye Territory Development Corporation. “As of now, the […]

March 3, 2017
Hong Kong-listed NagaCorp is set to open its new Primorye integrated resort in 2018, according to the director Primorsky Region’s Development Corporation, local media reports. “They embarked on the construction a year ago, however, ancient graves were discovered at that plot of land and had to be carefully extracted, processed and transferred to storage. Naturally, […]