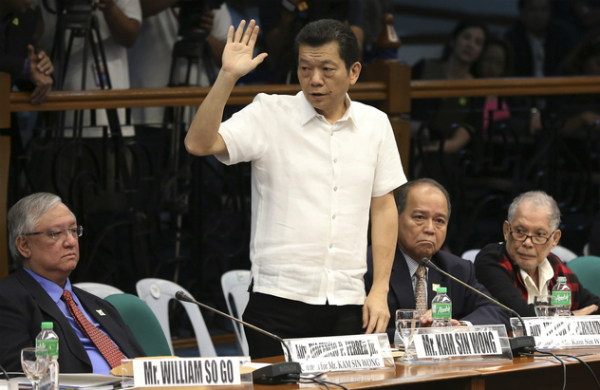 Kam Sin Wong, who was recently charged for his involvement in laundering $81 million stolen by hackers from Bangladesh’s central bank has denied any wrongdoing or knowledge of the heist, Reuters reports.

“I have nothing to do with the forging of bank documents for the $81 million. I don’t know the source of the $81 million,” said Wong. During a senate hearing on Tuesday, the Chinese junket operator named two Chinese men, Sua Hua Gao from Beijing and a Macau associate identified only as Mr Ding, who he said opened US dollar accounts at RCBC which was used to bring in illicit funds

“Two foreigners were responsible for bringing in the US$81 million,” said Wong.

Wong said he was owned P450 million (US$9.7 million) from one of the Chinese men after he helped him settle a casino debt, while the rest was used to buy gambling chips for junket clients, Wong also said he received a further $5 million via Philrem, a portion of which he said he was willing to return.

A Solaire official told the same hearing that $29 million ended up with them and belonged to an account of the Macau based high-roller.

The senate hearing, now in its third day, is to continue next week.