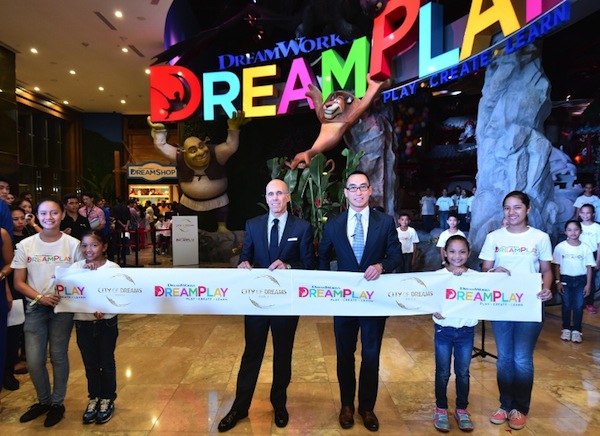 Melco Crown Entertainment said its DreamWorks-themed interactive play and creativity center DreamPlay by DreamWorks has enjoyed high levels of visitation, exceeding expectations, since its soft opening at the City of Dreams complex in Manila in March.

The company held the official opening for the attraction on Friday, attended by Melco co-chairman and CEO Lawrence Ho and DreamWorks Animation CEO Jeffrey Katzenberg.

The 5,000 sq. meter creative play-center allows children to play and participate in a wide range of creative activities with the characters of DreamWorks’ films, including Kung Fu Panda,” “Shrek,” “Madagascar” and “How to Train Your Dragon.”

It features twelve original attractions including learning Kung Fu with Po, the Kung Fu Panda; exploring Shrek’s swamp with the big green ogre; testing dragons for flight alongside Hiccup and Toothless and embarking on seafaring adventures with the Penguins of Madagascar. “’DreamPlay by DreamWorks’ is key to our family-entertainment appeal and ensures that City of Dreams Manila truly has something for everyone – as a compelling visitor leisure destination for families across the region,” said Melco Crown (Philippines) chairman and president Clarence Chung.

The City of Dreams, the second and largest integrated resort to open in Manila’s Entertainment City district, held its grand opening in February.