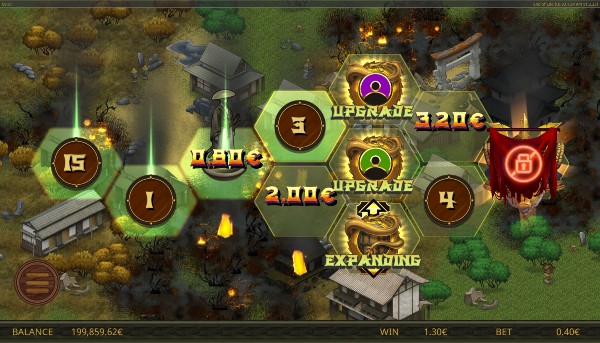 End of Edo is set in a period of Japan’s history known as the Fall of Edo – a time when the country’s militant, samurai rule was brought to an end and power was restored to the Emperor.

The Fall of Edo took place in 1868, when the Japanese capital of Edo (modern Tokyo), controlled by the Tokugawa shogunate, fell to forces favoring the restoration of Emperor Meiji. The Fall of Edo brought the samurai system to its long-awaited end and became the stepping stone towards the creation of modern Japan.

Players will join members of each of the four clans involved in the war which ended the Edo era, as they fight to restore Japan to peace in this action-packed Ganapati game.

An intense air of warfare permeates the base game, with a shadowy Edo castle in the background, dimly lit by the flames of war. Dramatic music emphasizes the game’s dark mood.

The game’s interactive element is what really makes the End of Edo stand out. The highly original, strategy-based bonus game allows players to battle their way across a tiled map one step at a time, picking up fun features and rewards as they go, as they fight their way to the Free Spins round.

Players must choose their own path – and in doing so, are control their own destiny.

The attention to detail in this slot game is truly special. The crackling fire and slashing sword sound effects, the unique rope pay lines and the Expanding Wild snakes which make a dramatic appearance across the reels, are all particularly worthy of note.