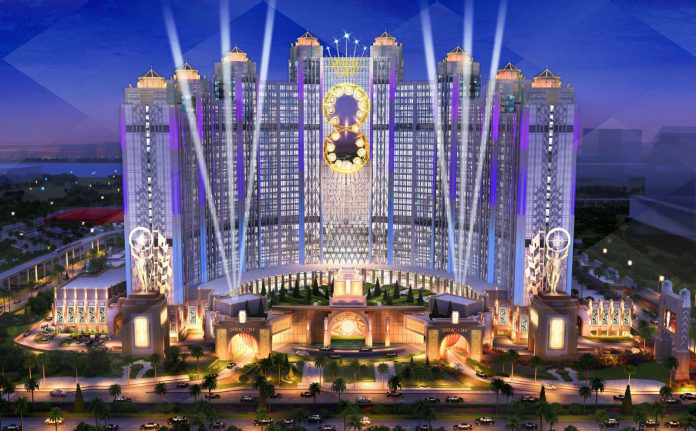 “Today marks the start of a new era of leisure destination entertainment for Macau and Asia,” said Ho.

‘It is the realization of our long-held vision to develop a leisure and entertainment destination that has no equal in Macau.”

There will also be over 30 food and beverage venues located throughout the property.

“The opening of Studio City stands testament to Melco Crown Entertainment’s commitment to help to evolve and greatly enhance Macau’s non-gaming entertainment proposition as we continue to work towards our strategic aim in supporting its evolution into a highly-diversified and world-leading leisure and tourism destination,”said Ho.

What the resort doesn’t include is VIP gaming facilities in a sign of the “new normal” in Macau.

Despite the company’s efforts to provide a broad array of non-gaming options, complying with the government’s push to broaden the tourism base, the resort was only allocated 250 tables, far short of the 400 it had requested.

The company says a third of the tables are allocated to its premium mass area, the Signature Club, which shares the same membership system as the City of Dreams.

“It appears that the entire floor including premium mass are non-smoking. Despite the lower number of tables, we do not think the floor feels empty, however the mixture of slots vs. tables does feel distinctively higher,” UBS said in a note. The firm adds that the situation may change once the resort gains more tables. It has opened with 200 and is scheduled to receive the extra 50 next year.