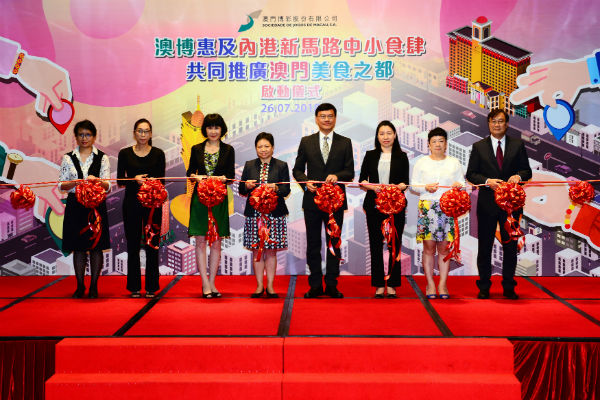 The campaign aims to reflect the Macau SAR Government’s policy on local SMEs, while promoting Macau’s culinary culture in support of the “2018 Macau Year of Gastronomy” initiative.

The launch ceremony of the campaign took place at the Grand Lisboa on Thursday, and was attended by a number of government officials and SJM executives.

SJM will distribute “Dining Deal Coupons” worth MOP10 and MOP50 to local citizens and tourists to Macau. Guests may use these coupons in place of cash at affiliated eateries displaying the designated campaign label.

Dr. Paul Hung, assistant chief operating officer of SJM, said in his speech, “Our campaign hopes to drive traffic and business growth of SME restaurants in the San Ma Lou and Inner Harbour area while also reinforcing Macau’s positioning as the UNESCO Creative City of Gastronomy… Currently, over 40 SME restaurants have registered to participate in the campaign.”

Mr. Choi Tat Meng, vice-president of the Board of Directors of Macau Chamber of Commerce, remarked, “Gastronomy is an indispensable element for Macau’s development, be it as a World Centre of Tourism and Leisure or as a City of Gastronomy. Therefore, fostering the development of the culinary industry, especially local cuisine, is vital for Macau’s growth. Many delicacies are hidden in SME restaurants; should they vanish due to natural disasters or other reasons, it would be a regrettable loss for Macau citizens and visitors. MCC is pleased to see SJM collaborate with SME restaurants to help them draw customers and promote businesses. I believe the campaign will facilitate the growth of the SME restaurants.”

To entice more people to use “Dining Deal Coupons” and encourage spending, guests will be immediately eligible for a lucky draw when their cash coupons are used. To enter, the lucky draw tickets must be stamped by a participating restaurant, then deposited into lucky draw boxes at designated locations. The “Dine for a Prize” lucky draw will be drawn once a month and give out sumptuous food and beverage prizes from Grand Lisboa, Hotel Lisboa, and Sofitel Macau at

SJM will provide free advertisement and promotion for the participating restaurants through a multitude of channels and media, helping them raise their profile. The promotion includes promotional videos played on SJM’s premises and shuttles, distribution of leaflets and publicity in traditional and social media, to name a few.