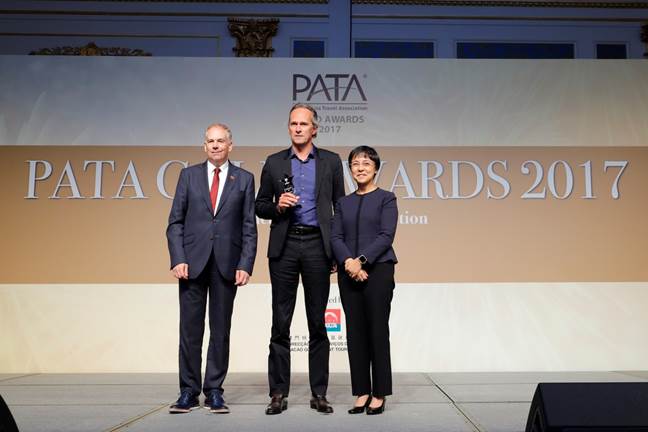 Melco Resorts & Entertainment announced today it has garnered the PATA Gold Award in the Hospitality Category for its collaboration with Hunan TV’s number one reality show Up Idol II in 2016.

Mr. Frederic Winckler said, “We are deeply honored to be recognized by PATA. As a leading integrated resort developer, Melco has always strived to push the envelope and bring new experiences to visitors from around the world. The collaboration with Hunan TV was a great success. Not only did it introduce our resorts and our world-class entertainment to tens of millions of new customers, it also took viewers behind the scenes of the most spectacular stage production, giving them a glimpse of the magnificent work and the cutting edge technology dedicated to it.

“We would like to thank PATA for the significant recognition, and MGTO’s support. We also wish to extend our heartfelt thanks to our colleagues, who worked tirelessly on the project – from the filming to the forming and execution of the marketing strategies – their contribution was indispensable.”

Last summer, Up Idol II, the popular reality show chose Macau as the filming destination for the first time, showcasing Melco’s iconic landmarks Studio City, City of Dreams’ The House of Dancing Water, as well as many attractions of the city. The three-day race featuring ten celebrities was premiered on July 22, 2016 to over 13,000,000 viewers. It was ranked number one with the most viewership on the date of broadcast. The collaboration helped Melco’s resorts and its headline entertainment gain impressive exposure in China.

In order to sustain the momentum, Melco launched the “Up Idol II x Dancing Water Backstage Adventure” immediately after the broadcast. The adventure invited guests to visit the fascinating backstage of the Dancing Water Theater, where they followed the footsteps of the celebrities in Up Idol Il. It included a visit to the 3.7-million-gallon underwater stage, the dressing room, and the wardrobe that housed over 400 sets of handmade costumes. Participants also got up close and personal with the show’s legendary stage set and props, such as the 17-meter high stage, and the giraffe in the opening scene.