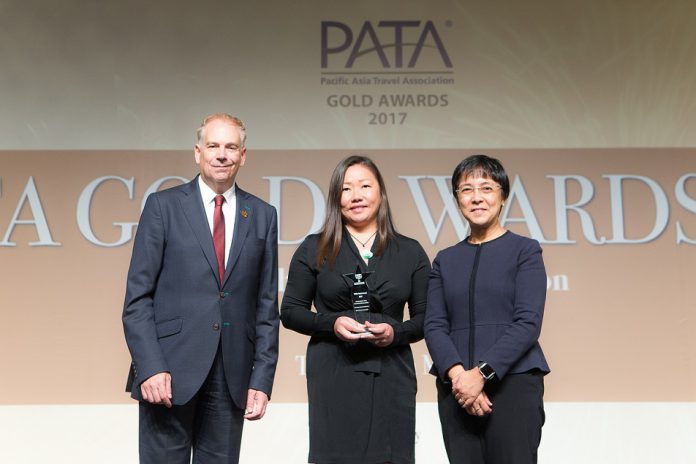 Macau casino operator Sands China was the recipient of two Gold Awards at the 2017 PATA Travel Awards, held at The Venetian Macau on September 15, 2017, as part of PATA Travel Mart 2017 travel fair.

The list of 31 winning entries for the 2017 PATA Grand and Gold Awards were in categories including Education and Training, Environment, Heritage and Culture, Marketing, Corporate Social Responsibility and Travel Journalism. Mark McWhinnie, senior vice president of resort operations and development, Sands China Ltd commented, “Winning PATA Gold Awards in these two very different categories is a mark of the range of talent and passion for excellence within Sands China Ltd. Sands ECO360 Global sustainability programme is designed to minimize our environmental impact, and reflects our determination to lead the way in sustainable building development and resort operations. This endorsement from the industry is hugely encouraging.”

Ruth Boston, senior vice president of marketing and brand management, Sands China Ltd. said, “The Parisian Macao’s Grand Opening marketing campaign, featuring French actress and brand ambassador Sophie Marceau, helped to generate awareness of our new resort and established The Parisian Macao as a must-visit destination. We are extremely proud and grateful to have been honoured at this key industry event.”

The Parisian Macao’s Grand Opening promotional film, produced by Saatchi & Saatchi Greater China, was an entertaining look at the romantic and adventurous spirit of both Paris and The Parisian Macao, with the tagline “Be Part of Paris”. Following its launch in Hong Kong, Guangzhou, Shenzhen, Shanghai and Wuhan, 70 percent of survey respondents said they became aware of The Parisian Macao opening after seeing the promotional campaign.

Inspired by the famed “City of Light”, The Parisian Macao is Sands Resorts Macao’s newest integrated resort. It features a half-size replica of the Eiffel Tower which sits majestically at the hotel’s entrance, and includes a full array of integrated resort facilities, approximately 3,000 guestrooms and suites, convention and meeting space, international restaurants, spa, kids’ club, health club, pool deck with themed water park, along with a 1,200-seat theatre and entertainment.