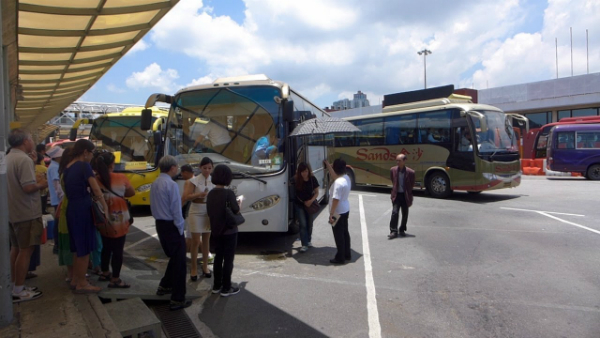 The number of gaming shuttle bus routes in Macau have decreased to 59, according to the director of the Transport Bureau (DSAT), Kelvin Lam Hin San.

In April, the Macau Transport Bureau said it was aiming to cut shuttle bus routes in the territory by 20.6 percent from 73 to 58. At the time, there were 65 bus routes still operating.

According to local media, Lam said the cut in the number of shuttle bus routes represents a decrease in the total number of around 10.8 percent.

The transport official also said it would study the viability of setting a cap on the number of gaming shuttle bus routes, which was suggested earlier by legislator Wong Kit Cheng.

‘The Bureau will continue communicating with gaming corporations and pay attention to their execution of cutting down the shuttle bus number, as well as their promotion of joint shuttle-bus services amongst themselves,’ Lam wrote.

Last month, three of Macau’s gaming operators announced they will be collaborating to refine their shuttle bus routes, jointly launching the “Cotai Connection”.

According to a press release from Galaxy Entertainment, the “Cotai Connection” is “an upgraded shuttle bus service that will facilitate the transport of visitors around the Cotai Strip.”

The enhancement is said to not only reduce the number of shuttle buses travelling between hotels, but also help streamline the shuttle bus routes and improve visitors’ overall experience.