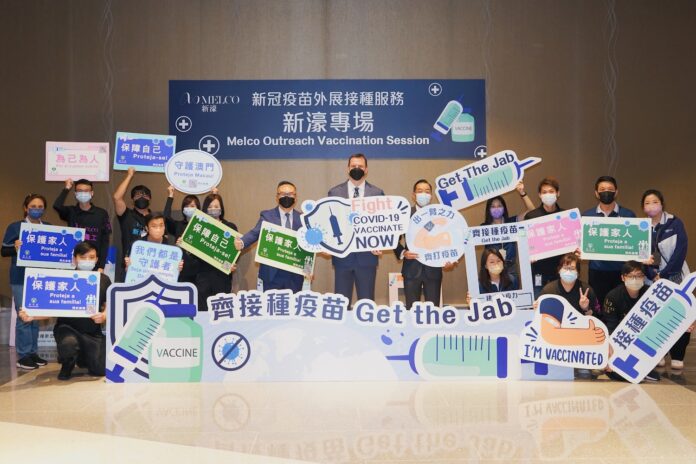 Melco said it’s holding an onsite outreach vaccination session in coordination with the Macau Health Bureau at the Studio City Event Center between March 3-4 to help colleagues and the community receive their first, second, or third booster shot.

On February 26, Melco Chairman & CEO Lawrence Ho announced that up to three days of special paid leave will be granted for Colleagues to support their children under 18 years of age and elderly parents who need to be accompanied to get vaccinated, subject to established guidelines. Most of the other operators have now announced similar initiatives.

Also, in coordination with the Macau Health Bureau and the Center for Disease Control and Prevention, education seminars and earlier vaccination outreach sessions were provided for Colleagues. To date, Melco’s Colleague vaccination rate in Macau has reached 95 percent.

SJM Holdings on Thursday announced its “SJM Vaccination Encouragement Programme,” which will run from now until April 30th. It’s designed to encourage employees to accompany the elderly and children.

Sands China on Thursday made a similar announcement – detailing a family vaccine leave and vaccination seminar for employees aimed at encouraging vaccination among young and elderly family members.

MGM China, Wynn Macau and Melco Resorts & Entertainment said they would offer staff three days of paid leave to accompany children or elderly relatives to get vaccinated, or boosted.