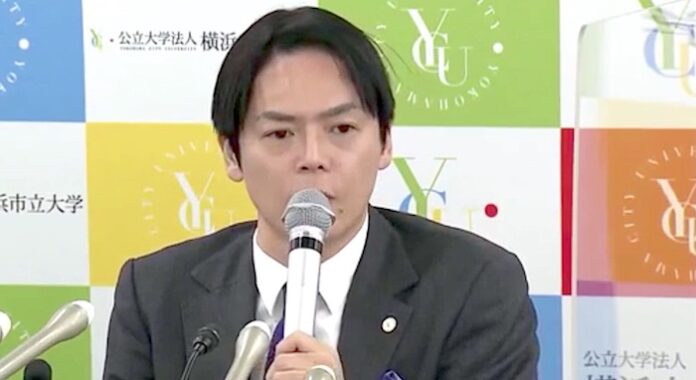 The person who appears headed to become the united opposition candidate in the August 22 Yokohama mayoral election has finally stepped forward.

Takeharu Yamanaka, 48, is a professor at Yokohama City University who specializes in public health and medical statistics. Recently he has been working on anti-Covid countermeasures.

Yamanaka has already indicated that if elected mayor of Yokohama he will cancel the IR development project. He cited the issues of gambling addiction, the worsening of the educational environment for young people, and excessive competition in the global casino market as the reasons for his opposition.

Yamanaka has not been formally backed by any political party, but it is reported that the leading Constitutional Democratic Party of Japan is in the final stages of announcing him as their candidate.

Moreover, the “don of Yokohama” Yukio Fujiki has also given his consent, telling the local media, “I don’t know Mr. Yamanaka, and I have no personal judgment about whether he’s good or bad. However, Kenji Eda recommended him, so he’s already perfect as far as I’m concerned.”

Kenji Eda is one of the leading House of Representatives lawmakers from Yokohama and one of the heads of the Constitutional Democratic Party of Japan’s local candidate selection committee.

The other major party whose support will be needed to turn Yamanaka into a united opposition candidate is the Japan Communist Party. So far they have said nothing about his selection, but in light of how strongly they feel about the anti-casino cause, it would be surprising if they didn’t ultimately fall in line behind him once the Constitutional Democratic Party of Japan has made its choice. This is not an absolute certainty, however, since the Communists wanted a candidate who had already joined the anti-casino movement.

Meanwhile, the pro-IR forces in Yokohama appear to be in some difficulty. The latest word is that incumbent Mayor Fumiko Hayashi, 75, has decided that she would like to run for reelection, but that the ruling Liberal Democratic Party may have decided to drop her as its mayoral candidate, judging that she cannot win the race.

This raises the prospect of the pro-IR conservatives splitting into two camps between Hayashi and yet-to-be-decided pro-IR challenger, which would seem to boost the opposition’s chances even further.

There are also three independent candidates who have declared their intention to run, but so far there is little indication that they will gather major support. Two of them are anti-IR and one says he is neutral and would make a decision after his election.

With just over two months to go before Election Day, much about the Yokohama mayoral race remains up in the air, but the developments are likely to come quick from here forward.