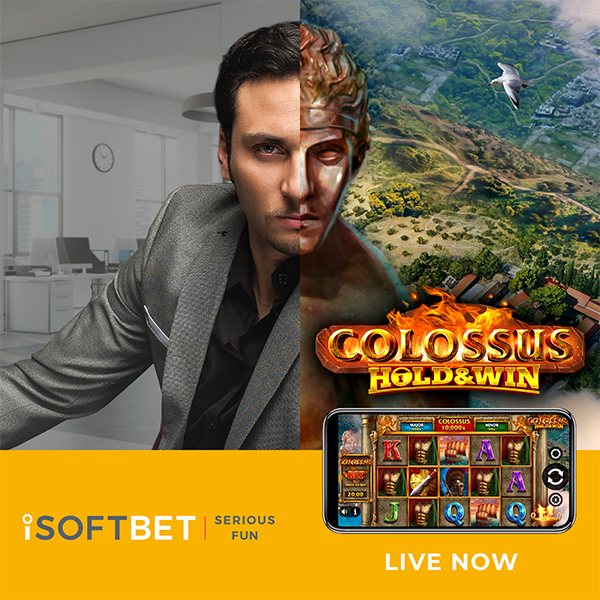 Situated in the shadow of the magnificent Colossus of Rhodes – a mythical statue dedicated to the Greek sun-god Helios – the 5-reel, 20-payline slot features Multiplier Wilds and the unique Colossus Hold & Win Respins round that offers players massive payouts.

The almighty Colossus Wild serves as the most valuable symbol in the game, expanding when it lands on a winning line and resulting in a multiplier of up to 10x being added.

Six or more shiny gold coins are required to trigger the Hold & Win Respins. The feature sees three initial respins awarded to the player and will reset each time one or more new coins land on the reels, with visible values being paid out when the respins run out.

Furthermore, at the start of the Hold & Win Respins round, as well as whenever a new coin lands or at the end of the feature, the Colossus Rising Flame can flare up to multiply the value of each coin in view by up to 10x, boosting the final payout considerably.

Players that fill the entire grid with gold coins during Hold & Win will gain one Colossus Spin on the special wheel, triggering either the Minor, Major or Colossus Award, worth 50x, 500x or a massive 10,000x their bet respectively.

Mark Claxton, Head of Games at iSoftBet, said: “We’ve decided to kick off the new year the same way we ended it, with yet another Hold & Win title embracing a renowned era of world history.

“Our Hold & Win titles have become a true staple of our games offering, and we are delighted to be able to provide our global audience with rich entertainment on such a regular basis.”