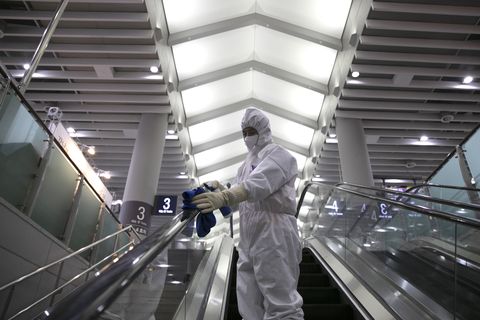 The Coronavirus, now renamed as Covid-19, has devastated the near-term outlook for Asia’s casino operators, though analysts still expect demand to snap back sharply once the outbreak is under control. The big question is when that might be.

China this week changed its diagnostic procedures, resulting in a spike in the number of confirmed cases and clouding the picture as to the extent of the disease. As of going to press, there were more than 60,000 confirmed cases, causing 1,369 deaths.

Macau’s government is mulling an extension to the closure of its casinos, which may come as soon as Friday, while Hong Kong has ordered schools to remain closed, now until March 16. Travel restrictions remain in place across the region for travellers from China, Hong Kong and Macau, while the Philippines has added travellers from Taiwan to its ban. Australia has a ban on non-residents who have travelled through China, as has Vietnam, New Zealand and Malaysia, to name but a few.

South Korea’s foreigner-only casinos have denied entry to Chinese travel groups since the end of January, despite the government only placing restrictions on travellers from Hubei.

Several of Macau’s operators have announced their fourth-quarter results in the past few days and revealed the extent of the damage on their operations in the territory.

Wynn Macau disclosed a daily operating loss of $2.5 million, or $75 million a month, while MGM disclosed a daily loss of $1.5 million. Management from both companies however pointed to strong growth in the first few weeks of the year, ahead of the casino shutdown.

“For Macau, the near term looks bleak, but we see a solid recovery in place in 2H followed by a strong 2021,” Bernstein wrote in a note, estimating that February GGR will be down 95 percent.

Commenting on Wynn’s results, Nomura Research said that when the casinos are permitted to reopen, “like the post President Xi visit, pent-up demand should be strong and WYNN should resume its $4mn/day pace of EBITDA.”

Although there have been no new cases confirmed in Macau since the closure of the casinos, it’s still far from clear when the outbreak will peak, or when travel bans will be lifted.

The World Health Organization on Wednesday said it was too early to tell whether the virus had peaked and warned it could still go in either direction. Before China changed its diagnostic regime, the number of new cases had appeared to be stabilizing, although elsewhere new clusters of infection have appeared, in particular in the U.K. and in Vietnam, which has put a 10,000-strong community near Hanoi under lockdown.

Prof. Wolfgang Georg Arlt, founder and director of the China Outbound Tourism Institute, which monitors tourism trends from the Mainland, said authorities have overreacted to the situation.

“To block the entry of Chinese persons or of persons who have been visiting China into other countries is a reaction way out of proportion, based on panic and on catering to local demands of a misinformed public,” he said. “There will be no “peak” but the hype will stop and the situation will be declared to be “under control” in March.”

Arlt said that similar to after the outbreak of Severe Acute Respiratory Syndrome (SARS) in 2003, tourism from China is likely to snap back stronger than before.

However, another key question mark is the impact on the Chinese economy, which had been expected to recover this year after Beijing reached a partial trade deal with the U.S.

Jefferies Global Research estimates that only 20 to 30 percent of migrant workers will be back in China’s factories by March, with 40 to 50 percent back by the end of the first quarter.

“With China’s economic growth taking a 1Q20 hit, this could be a step back for consumer sentiment,” it said in a research note.

The outbreak has also once again highlighted flaws in many of the business models across Asia, throwing the spotlight on the vulnerability of casinos in locations that don’t allow locals to gamble and the over reliance across the region on the China outbound tourist.

Donaco International this week reported that visitation at its Aristo International casino in northern Vietnam is down 75 percent and rolling chip turnover down 82 percent. The casino is heavily reliant on foot traffic coming over the Lao Cai border from China, which has been severely restricted.

In the Commonwealth of Northern Mariana Islands, Imperial Pacific International, which is almost entirely reliant on China VIPs, put out a statement stressing its commitment to the local community, whilst acknowledging it will struggle financially as a result of the crisis.

Singapore’s two integrated resorts, which have a wider customer base and stronger finances, are also expected to take a hit from falling tourism numbers.

However, UOB Kay Hian lead analyst Vincent Khoo was cited by local media as saying that he too expects a come back in the second half. He also points to another potential silver lining for the operators.

“In order to mitigate the impact and stimulate recovery in the tourism sector, we do not rule out the possibility of the [Singapore] government implementing a temporary cut on gaming duty as well as deferring the previous 50 percent casino entry levy hike attributed to local patronage,” he said. The hike in local entrance fees had been affecting revenue for both casinos in the mass market segment.

The Philippine government, which has reported one of only three fatalities outside of China, was quick to respond to the crisis putting in place entry bans. So far, the outbreak appears to have been contained, though it’s unclear as yet as to the impact of the travel restrictions. Unlike in many other nations around the region, the Philippines does enjoy good mass market support from its locals.

Still, as Bernstein Research points out that with the virus still spreading and travel bans in place, any forecasts as to the full impact at present are guessing games.