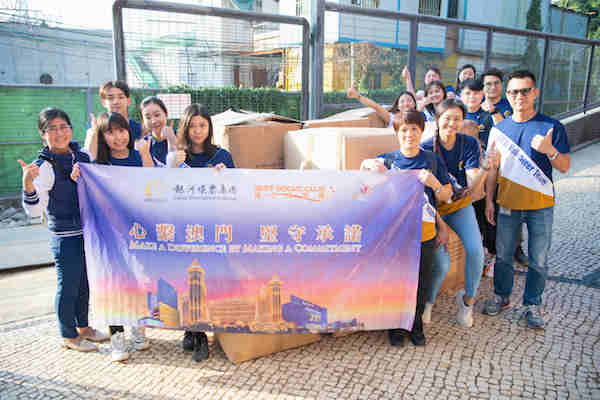 The government has not yet provided details on how it intends to handle the renewal process when the licenses expire in two years. Yet at the time of the interim review, the operators were judged on many aspects of their business including promotion of locals and sourcing from Macau’s small-to-medium sized businesses.

However, Klebanow Consulting’s Andrew Klebanow, who argues that operators have become more skilful at amplifying their CSR efforts via media platforms, insists that casinos “understand the importance of being good corporate citizens” regardless of the renewals process.

“One could take a cynical view and see these contributions as a way to curry favour with the central government ahead of licensing renewal, but it is in the casinos’ best interests to support the communities in which they operate,” he says.

Klebanow, who adds that Macau’s casinos have a lengthy track record in CSR, highlights how casinos collectively contributed more than MOP215 million (US$27 million) towards relief efforts following Typhoon Hato, which struck South China in 2017, with Las Vegas Sands alone donating MOP65 million. “That’s a lot of money just for goodwill,” he says.

Of course, CSR initiatives have reputational benefits, encouraging loyalty from staff as well as customers, but the implications of failing to commit to such schemes have become blindingly obvious to Macau’s casino giants.

According to a newly published legal guide by Rato, Ling, Lei & Cortés, “repute and probity” are among the attributes that have become “absolutely mandatory requirements” for concession-holders in Macau.

Cari Wong, public relations manager at MGM in Macau, echoes Klebanow’s comments that CSR has been a long-term commitment by casinos: “At MGM, we believe in creating great moments for our community and city. This belief has guided our every action and activity, and we have been assimilating art and entertainment into daily life since 2007.”

Last year, MGM organised 106 community events, benefiting more than 1,500 senior citizens, over 570 young people and more than 870 persons with disabilities, as well as 1,000 low-income and single-parent families. Since 2013, MGM has also reduced greenhouse gas emissions by 16.4 percent, energy consumption by 16.7 percent and water consumption by 10.9 percent.

Last year, one of the CSR exhibitions hosted by MGM explored the ‘beauty of Chinese embroidery’, with the operator separately describing the “celebration of traditional Chinese arts and culture” as a “fundamental theme” of the operator’s art programme.

Similarly, Wynn Macau, which organises various CSR activities, strengthened its links with China by organising educational tours to Kunming and Nanjing, as well as a scholarship agreement with Fudan University, while Wynn Macau celebrated the 70th anniversary of the founding of the People’s Republic of China (PRC), as well as the “20th anniversary of the return of Macau to China”.

Melco Resorts & Entertainment CEO Lawrence Ho last year lead a team of executives on a trip to China to gain a greater understanding of Beijing’s Greater Bay Area initiative. The trip was part of its Splendors of China learning program about China’s cultural heritage.

The company was also recently honored by the global environmental disclosure system CDP, formerly known as the Carbon Disclosure Project, receiving an A- score in recognition of the company’s efforts in reducing carbon and climate change.

CSR initiatives can also be internal, as well as external. Experts such as Carlos Siu Lam, an associate professor in gaming education and research at the Macau Polytechnic Institute, says that how operators have treated staff, through to how they have “promoted upward mobility for local workers,” will be taken into account when the licence renewals are being weighed up by the authorities.

Moreover, at Sands China, in 2016, a five-year plan was set out, with a special focus on three of the United Nations’ 17 sustainable development goals: clean water and sanitisation; affordable and clean energy; and responsible consumption and production.

The level of commitment from operators can be illustrated by the length of their annual CSR reports. For example, Galaxy Entertainment Group, which describes itself as “a patriotic, Chinese-owned company” provided a mammoth 152-page offering in 2018, detailing dozens of actions.

The operator’s projects included introducing the China women’s volleyball team to local youngsters, hosting community walks, arranging a trip to the liaison office of the Central People’s Government in Macau and a “patriotic” educational study trip to Beijing, as well as a women’s fitness carnival.

Two of Galaxy’s CSR strategy pillars – ‘protecting our Earth and natural resources’ and ‘sculpting a bright and responsible culture’ – shine a spotlight on challenges regarding the environment and responsible gaming.

There is a broad consensus across the back offices of Macau’s casinos that these two specific areas require greater focus, even though priorities change over time.

The following year, the Macau-based study, ‘Measuring Corporate Social Responsibility in Gambling Industry,’ outlined how the issues of ‘environment’ and ‘community’ had been relatively neglected.

With the environment becoming a more pressing issue globally, and especially in China – commonly labelled as the world’s biggest polluter – green initiatives are only going to become more important as the renewal deadline looms.

The licensing process, though, will look beyond the scope of CSR activities.

“I think what is far more important than the amount of money casinos contribute to CSR initiatives is the capital investment they are making to their properties to further diversify their hospitality and entertainment offerings,” Klebanow says.

“Both the Macau government and the PRC have long stressed the importance of making Macau an international tourism destination that is less reliant on casino gambling. It is not the millions of dollars that casinos invest in CSR initiatives that impress the government, but the billions of dollars they are spending to expand their properties. It is that commitment that will have a far greater influence on licensing renewals.”

However, having established comprehensive CSR plans that already cover a plethora of touchpoints, there is little doubt that operators are already aware that inaction in this area is not an option.

Now the challenge is to demonstrate to the decision-makers how they are on the front foot when it comes to being socially responsible in an industry in which occasional negative headlines are inevitable.