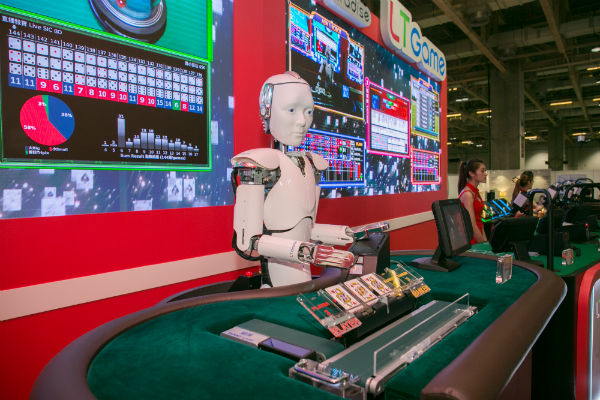 The show took a off the beaten track approach to the exhibition and the summit this year – with the introduction of a line up of new exhibitors representing companies in robotics, video surveillance and cloud computing.

The exhibition also included, as always, manufacturers and developers of traditional gaming equipment. Aristocrat’s VR slot showcase was a hit, as was LT Game’s robotic dealer and DJ.

The MGEMA also invited exhibitors from the cultural and arts sectors as well. One of the largest exhibition spaces on the show floor was held by the international fashion platform LOTI, with clothing from 15 designers on display in a tranquil space organized around several café tables. As for the conference, the three-day summit began on Monday, with sessions delivered in English, Chinese, Japanese and Korean. The range of languages and speakers meant that sessions were truly pan-Asia – though it was difficult to keep up with some of the faster speakers.

An interesting observation of the summit was a massively increased focus on (non-gambling) mobile games and esports, which made up of an entire day out of the three-day conference.

Speakers discussed the growth of esports tournaments in mainland China, and touched on how it may eventually lead to more tourism and visitors to Macau.

The final day of the conference got back on the topic of gaming, with discussions about the roadmap for IRs in Japan, and Macau gaming trends.