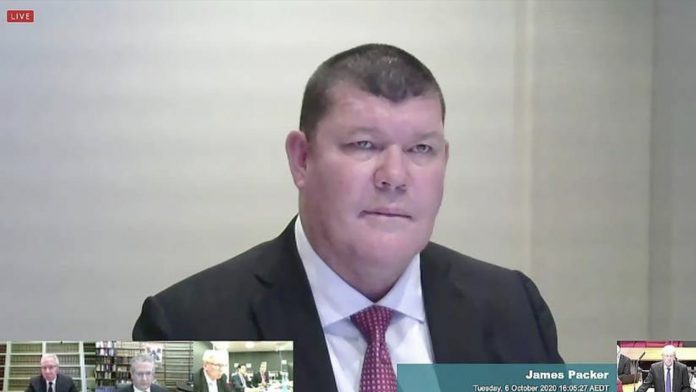 In yet another day of devastating testimony at the New South Wales inquiry into the probity of Crown Resorts, former Chairman James Packer admitted to both a “significant failure” in compliance and “shameful” personal conduct, which he blamed on his own medical condition, bipolar disorder.

Testifying by video from his luxury superyacht in the South Pacific, Packer admitted that Crown Resorts operations in China to recruit VIPs, which led to the arrests of 19 members of staff, were not proper.

“I believe that Crown had legal advice that said what they were doing was legal,” Packer said. “It’s a failure in compliance. A significant failure.”

The Australian media focused on the even more sensational part of Packer’s testimony when he admitted threatening an unnamed businessman in regard to a dispute on Crown Resorts policy. Packer acknowledged that his threatening emails were both “shameful” and “disgraceful.”

“At the time of these emails, Mr. Packer, you understood that you had an obligation not to engage in conduct likely to bring discredit onto Crown Resorts, didn’t you?” he was asked.

He went on to blame his mental condition at the time for his lapses in behavior.

Packer resigned as chairman of Crown Resorts in December 2015, shortly after making the threats, but the reasons for his departure were hidden from stockholders. Packer explained that he had hoped that it would “stay a private matter.”

Today, he is not on the board, but clearly exercises great influence with a 37 percent stake in the firm worth about A$2.2 billion (US$1.6 billion).

The Independent Liquor and Gaming Authority (ILGA) inquiry is aimed at determining Crown Resorts’ fitness to operate a 75-floor, A$2.2 billion casino tower in Sydney.