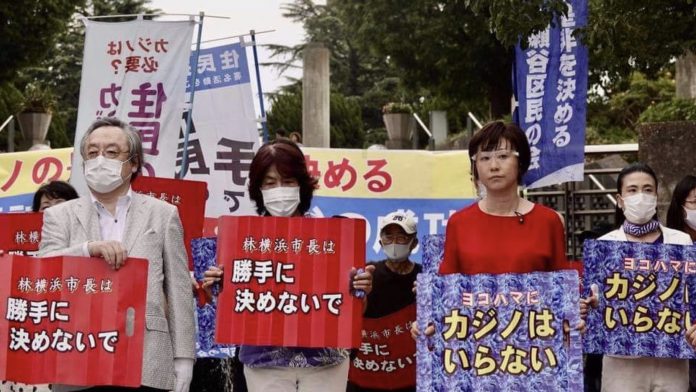 The two major citizen group efforts to head off IR development plans in Yokohama are preparing to launch their signature drives, keeping the political pressure on even as national policy has stalled.

Launching first, from September 4 until November 4, is the petition demanding a popular referendum over the city’s IR development plans.

The aim of this group, fronted by prominent constitutional scholar Setsu Kobayashi, is to deliver the signatures to the Yokohama City Council when it reconvenes in January 2021, and to trigger a popular referendum to be held around May 2021.

Originally the group had targeted 500,000 signatures, but Kobayashi explained at a press conference in July that the target would be about half that amount because the Covid-19 pandemic has resulted in fewer people who can take to the streets to collect the signatures.

Kobayashi has acknowledged that his campaign can only increase political pressure on the city government and any referendum would not be legally binding.

For this reason, the other anti-casino citizen group has essentially declared Kobayashi’s campaign to be meaningless and says that the only real way to stop IR development in its tracks is to recall Mayor Fumiko Hayashi from office in a legally obligatory manner.

The Hayashi recall signature drive will take place over a two-month period between October and December, and should it manage to gather about 490,000 valid resident signatures, it can trigger a recall process that could potentially remove Hayashi from authority.