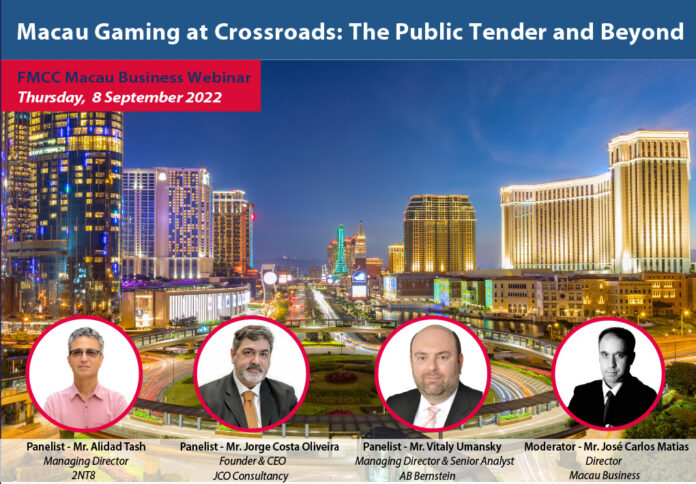 A panel of gaming insiders and analysts, including Alidad Tash, Vitaly Umansky, and Jorge Costa Oliveira, brainstormed the future of Macau in a session hosted by Macau Business and the France Macau Chamber of Commerce titled “Macau Gaming at Crossroads: The Public Tender and Beyond.”

With junkets gone, travel restrictions due to the zero COVID policy of Mainland China, along with increased competition from emerging IR destinations across ASEAN, Macau’s profit pie of $9 billion may erode – but – still – “there will be enough apples on the tree” even if the tree is shredded, as the situation of local gaming industry currently stands.

One of the highlights of the panel discussion was whether Macau – if it moves to a more non-gaming segment scenario, could it nurture and scale other activities such as MICE.

Comparing the Las Vegas model of MICE the senior analyst noted: “You will need 100,000 hotel rooms at least. Las Vegas has 150,000 hotel rooms with 90% occupancy, world-class airport connectivity to all cities in the US and international destinations, which is 10 minutes from the LV Strip, and LV is comparatively affordable. To establish similar facilities in Macau is not going to be easy and feasible.”

Umansky considers that Macau can emerge as a destination to facilitate smaller conventions but to have conventions of the scale to become a top destination in Asia is not on the cards.

The “Greater Bay Area is oversaturated for MICE activities. Zhuhai, Hong Kong, Guangdong, and other cities have MICE capacities of scale, a whole host of amenities and hotel rooms,” Bernstein’s MD added.

Vitaly argued that if the MICE business was to be obtained from Mainland China, “most will not prefer to go to Macau, it is still a taboo. With choices as Hong Kong, Singapore, and Macau, where are you going to go?” the analyst prompted.

In turn, Jorge Oliveira, who directed the drafting of the original Macau gaming law liberalizing the industry, fears that half of the local business will be lost to Thailand in near future. The industry insider argued that while non-gaming segment revenues may never be like Las Vegas, what was the option for Macau?

Oliveira suggested that “MICE can be grown, with incentives from the Government.”

Panelists were of the opinion that the Junket market is a forgotten story for Macau, not seen to be coming back, at least in near future.

Umansky noted that he does not see Macau’s recovery to pre-Covid levels before 2024, which he defined as the “new normal in the gaming industry” adding that the junket business is never going to come back as its massively disrupted.

2NT8 managing director, Alidad Tash, was in alignment with the Bernstein analyst that of Junket market is “history” in Macau, at least for a long while. In turn, Tash argues that once COVID-19 is over, the “mass market will be the puller.”

“Junkets were not worth much (to operators), but they were worth to the Government,” the industry insider added.

Alidad Tash reiterated that the loss of the facilitation of money flow to VIP players, and fewer individual visas issued, will have a major effect on the premium market.

Regarding concerns over the Chinese economic outlook, Vitaly Umansky pointed out: “What does the Chinese economy look like? Are people really keen to spend money? Of the 60 million a very limited (number of) people will come to Macau. That is the class we are talking about, the upper and upper middle class. A $5,000 a month earner is not a Macau customer,” the senior analyst noted.

There was a consensus in the panel that the Macau Government needs to work in tandem with the casino operators and ensure better infrastructure to increase the visitations in Macau.

As to the Macau government’s position towards the gaming industry Alidad Tash noted that the first Chief Executive was “Pro” gaming, the second “Neutral” and the third, and current, “Anti.”

The full video report is available on demand HERE.