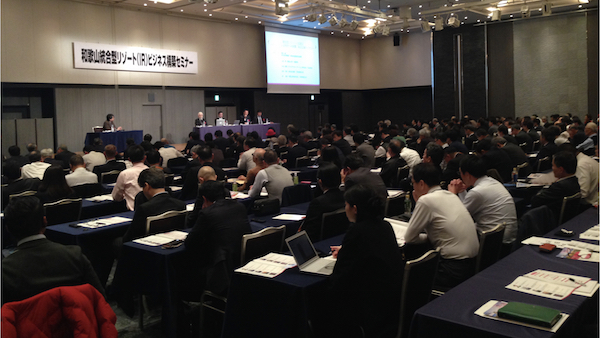 The Wakayama IR Business Connect Seminar was held on the late afternoon of Feb.19th and was successful in drawing interest from a large cross-section of the local business community, as well as domestic and international media.

More than 300 participants gathered at a hotel near Wakayama Castle for seminars and panel discussions about the impact that an IR might have on the local economy, and other matters of concern.

The event was organized by AGB and Hogo Digital, in formal partnership with the Wakayama Chamber of Commerce and Wakayama Prefectural Government, and sponsored by Solaire Resort & Casino, Groupe Lucien Barriere, Galaxy Entertainment Group, and Mohegan Gaming & Entertainment.

Although Wakayama is one of the very few municipalities where both the political leadership and business community have lined up firmly behind the IR bid, many analysts continue to see Wakayama as a long shot due to its geographical position so close to Osaka Yumeshima.

Perhaps the best answer to that concern came from Jonathan Strock, president of Barriere Japan, who pointed out that the experience in other countries pointed to the fact that having several IRs clustered in a certain region can have a synergistic effect. He cited Marina Bay Sands and Resorts World Sentosa in Singapore as a successful example of having two IRs near one another, but of very different character.

Niall Sean Murray, chairman of Murray International Group, impressed the audience with an account of the sheer volume of supplies IRs need in order to function, many of them sourced from local businesses. An IR’s demand for 25,000 eggs on a daily basis will not be soon forgotten.

After the lectures and panel discussions, a lively social gathering was held across the hall at which local businesspeople were able to make direct contact with the IR operators and others who were present.

When Asia Gaming Brief asked Hiroomi Katayama, chairman of the Wakayama Chamber of Commerce & Industry, why the response from the local business community had been so strong, he pointed out that this was the very first time that local business people could attend an event in the prefecture where as many as four IR operators had gathered in one place. All previous seminars had at most a single guest representing the IR operators.