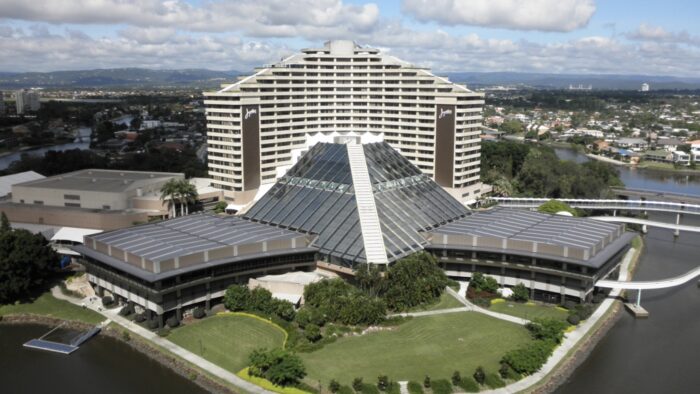 Star Gold Coast has just turned 35, but has its sights set firmly on the future, with a $2.1 billion masterplan to put it on a scale with some of the world’s largest integrated resorts.

The resort originally opened its doors as The Conrad Jupiters Casino and Resort in November 1985, costing $186 million to build. Since then more than 8 billion cards have been dealt at the casino.

Gaming Operations Manager Steve Hennessey was one of the original staff, joining at the tender age of 23 after deciding a life on a construction site was not for him.

He says when he joined there were rumours that jobs in the new casino would go to foreigners as the company was American-owned at the time, but that wasn’t to be, providing a valuable source of employment on the Gold Coast.

Asked about some of the biggest changes he has seen and he points to a recent smoking ban and advances in casino technology.

“Technology has made a huge difference in the way we operate, from simple things like shuffling the cards. When we first started, we had to shuffle them ourselves and now we have machines that can do it for us,” he said in a company release. “When we first opened our doors, both guests and gaming management were able to smoke whilst working on the gaming floor, something you wouldn’t hear about today!”

The property has evolved over time, but perhaps the biggest changes have come about in the last six years.

In 2014, the property embarked on a multi-million dollar transformation involving one of the most extensive hotel refurbishments ever undertaken in Australia. It included the build of a new luxury suite hotel, a new poolside experience, and an array of new, contemporary restaurants and bars.

It began work on its first luxury suite hotel – The Darling – in 2015, while in 2016, the property refurbished its 596 existing rooms, complemented by a refreshed Lobby Level and checkin area.

Australia’s tourism market had been changing with a growing number of Asian tourists and the partnership with the Hong Kong investors was expected to help the company to capitalize on that trend.

Projections of the Queensland market’s potential due to the relative proximity to Southern China had created irrational investor exuberance at about that time. With Hong Kong billionaire Tony Fung proposing an $8 billion investment near to Cairns. He subsequently abandoned the project, which had been criticized as being too large for the market to support.

The Queensland government in July this year also scrapped plans for a second Gold Coast casino license, leaving Star in pole position at least for now.

The company had lobbied hard against further competition and sought exclusivity in the market, but was denied the privilege.

Star Gold Coast General Manager Gaming Operations Ian Brown, who has also been with the property since day one, said the resort is looking to the future.

“While we’ve undergone some incredible milestones so far – through the transformation of our existing property, the launch of The Darling, and the start of construction on our Dorsett hotel and apartments tower – we can’t forget that the future is just as bright with our approved $2 billion+ masterplan in the pipeline with our consortium.”

Brown said Star Gold Coast, which was rebranded from Jupiters in 2017, has undergone a significant shift over the past six years, from a majority gaming property to a diversified non-gaming offering.

The masterplan involves the addition of four more towers and further resort amenities. The resort will eventually have around 3000 hotel rooms and apartments, which Star says will exceed what Marina Bay Sands in Singapore offers, and be on a scale similar to the largest integrated resorts in Las Vegas.

Japan - January 8, 2021
A committee of the Yokohama City Council dominated by the ruling Liberal Democratic Party and Komeito quickly moved to quash the IR referendum proposal submitted after two months of signature-gathering activities by local residents, which had gained more than three times the required number of signatures.